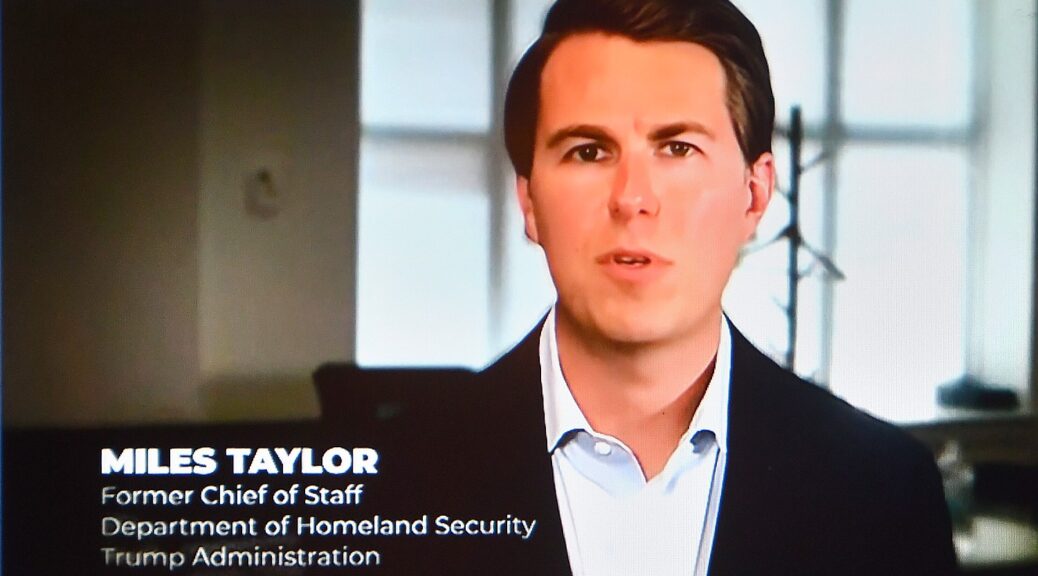 As the Republican National Convention 2020 unfolds with stunning ferocity, mendacity, and fear-mongering, basically offering an Alice Through the Looking Glass Orwellian alternative reality, more and more Republicans, including Presidential appointees, legal experts and Congressmen and elected officials have allied against Trump for his corruption and abuse of the Presidency. These include former Governors John Kasich and Christine Todd Whitman and former Secretary of State Colin Powell who appeared at the Democratic National Convention in support of Joe Biden.

“The president’s bungled response to the coronavirus pandemic is the ultimate example…His first term has been dangerously chaotic. Four more years of this are unthinkable.”

And former Senator Jeff Flake of Arizona, in declaring his support for Biden for president, stated, “And so, it is because of my conservatism, and because of my belief in the Constitution, and in the separation of power, and because I am gravely concerned about the conduct and behavior of our current president that I stand here today – proudly and wholeheartedly – to endorse Joe Biden to be our next president of the United States of America. (Watch Senator Flake’s remarks HERE.

On the first day of the Republican National Convention, former Republican Members of Congress, including former Arizona Senator Jeff Flake, announced their support for Vice President Joe Biden and Senator Kamala Harris. In a strong rebuke to the current administration, these former members of Congress cited Trump’s corruption, destruction of democracy, blatant disregard for moral decency, and urgent need to get the country back on course as a reason why they support Biden. These former Members of Congress are supporting Joe Biden because they know what’s at stake in this election and that Trump’s failures as President have superseded partisanship.

With the support of these Members of Congress, the Biden for President is launching Republicans for Biden, a national effort to engage Republicans who are supporting Biden this fall. The campaign will encourage Republicans to organize their communities for Biden using the Vote Joe app and other relational organizing tools. More information is at joebiden.com/republicans or by texting GOP to 30330.

On August 25, as the Republican National Convention was underway, former Republican Presidential Appointees and legal experts came out in support of Joe Biden and against President Trump in light of the corruption and abuse of power that has pervaded the current administration. Trump has used the presidency to enrich himself — spending countless tax dollars at his own properties. Members of his administration have failed to divest themselves from conflicts of interest as promised. And, Trump has weaponized the Executive Branch against its core mission, including using the U.S. Justice Department to protect the president and his friends, over the American people and the rule of law. Trump has welcomed wealthy special interests into the Oval Office and to the highest levels of his administration to develop and guide policy.

As President, Biden is dedicated to restoring even-handed justice and the principle that no person is above the law. He would:

Meanwhile, an alternate Republican Conservative convention is underway this week of Never Trump groups. A “Convention on Founding Principles,”put on by Evan McMullin and Mindy Finn’s Stand Up Republic and the eclectic think tank, the Niskanen Center, is running as counter-programming to the Republican convention. The event is being live-streamed and available for viewing on Facebook and YouTube.

And the Lincoln Project continues to produce amazing videos, ads, social media campaign. “The Lincoln Project is holding accountable those who would violate their oaths to the Constitution and would put others before Americans.”

The stated mission of the Lincoln Project: Defeat President Trump and Trumpism at the ballot box.

“We do not undertake this task lightly nor from ideological preference. Our many policy differences with national Democrats remain. However, the priority for all patriotic Americans must be a shared fidelity to the Constitution and a commitment to defeat those candidates who have abandoned their constitutional oaths, regardless of party. Electing Democrats who support the Constitution over Republicans who do not is a worthy effort.” (lincolnproject.us)