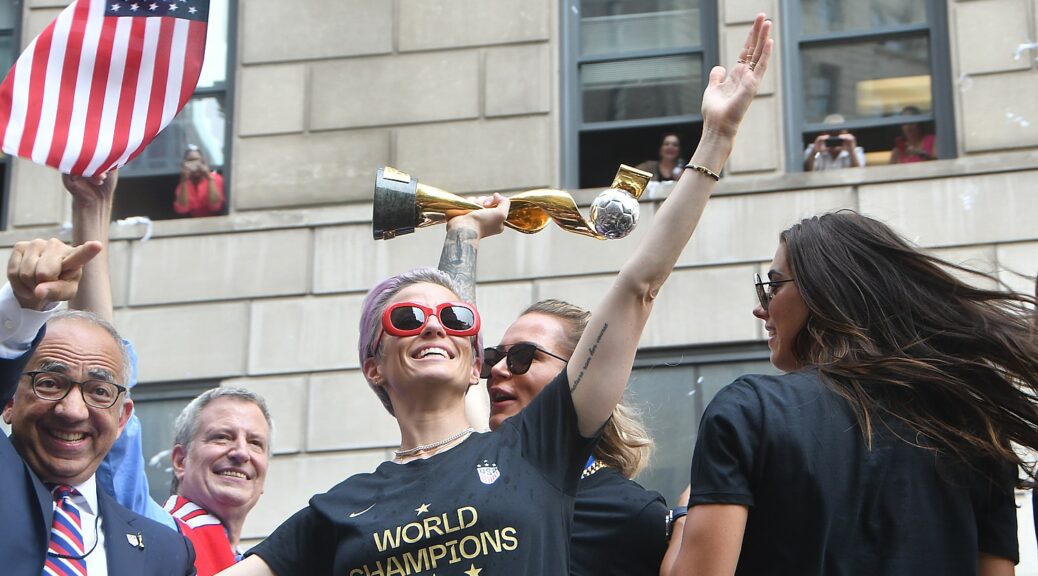 They came in incontrovertible triumph, a study in strength, talent, perseverance, grit, discipline – celebrated role models for girls and women everywhere. True champions, the US Women’s National Team battled on the to become four-time World Cup Champions, winning two consecutive titles, pitch as well as off, their fight for equal pay elevated to national politics.

Just before stepping off for their ticker-tape parade through the Canyon of Heroes through New York’s financial district to City Hall where they would receive the Keys to the City from Mayor Bill De Blasio, New York State Governor Andrew Cuomo signed a law prohibiting unequal pay on the basis of a protected class for all substantially similar work and forbidding employers from asking prospective employees about their salary history. He also called on U.S. Soccer to pay the women’s national team the same as the men’s national team

“There is no rationale why women should not get paid what men get paid. These are women’s soccer players, they play the same game as the men’s soccer players, and they play it better – so if there is any economic rationale, the men should get paid less than the women,” Governor Cuomo said. “New York will continue to lead the way forward and stand in solidarity with women and girls in every corner of this state. By signing this legislation, we are not only doing the right thing, we are also doing the moral thing and equal pay for equal work is now the law in the State of New York.”

There were signs calling for “Equal Pay,” but few chants could be heard over the squeals of delight when the 2019 World Cup Champions came into view.

During the parade, US Soccer Federation President Carlos Cordeiro was all smiles, and when it was his turn to come to the stage – greeted by chants of “Equal Pay, Equal Pay” – was conciliatory, suggesting that prayers – or rather, the court case – would be answered to the women’s satisfaction.

“To our Women’s National Team and the millions who support them, in recent months, you’ve raised your voices for equality.  Today, on behalf of all of us at U.S. Soccer, I want to say, we hear you, we believe in you and we’re committed to doing right by you.

“That’s why, over the years—from our development programs to our youth national teams to our professional leagues to our women’s national team—U.S. Soccer has invested more in women’s soccer than any other country in the world.  We will continue to invest more in women’s soccer than any country in the world.  And we will continue to encourage others, including FIFA, to do the same.

“We believe that all female athletes deserve fair and equitable pay.  Together, we can get this done.

“Because as this team has taught us all, being the greatest isn’t just about how you play on the field, it’s about what you stand for off the field.  It’s about who we are—as a sport and as a country.  The 2019 Women’s World Cup Champions!  The United States of America!  One Nation, One Team!  Go USA!”

Then Megan Rapinoe came to the stage, a glittering star among stars not just for winning the Golden Boot for most goals and the Golden Ball as the tournament’s most valuable player and co-captaining the team to their victory, but for her bold stand for equal pay, for social justice (she was one of the few athletes who knelt in solidarity with Colin Kaepernick), and her rejection of any invitation by Donald Trump to visit the White House, prompting his twitter ire.

She went out of her way to express appreciation to Cordeiro. “Thank you, you were incredible during the World Cup….. everyone gets booed in a position of power. I will stick my neck out, endorse Carlos. I think he’s on the right side of things. I think he will make things right…”

Her speech, delivered on the City Hall steps extemporaneously and without notes, was a call to action, and a call to come together.

“I think this team does an incredible job of taking that on our shoulders, and understanding the position we have and the platform we have in this world.  Yes we play sports, yes we play soccer, yes we’re female athletes, but we’re so much more than that. You’re so much more than that. You’re more than a fan who supports sports, who tunes in every four years. You’re someone who works these streets every single day, you  interact with your community every day. How do you make your community better, how do you make the people around you better, your family, your closest friends, the 10 closets people, the hundred closest people to you. It’s every single person’s responsibility

“There’s been so much contention in these last years. I’ve been a victim of that. I’ve been a perpetrator of that. If I’ve (hurt) the Federation  sorry for some of the things I’ve said – not all the things. But it’s time to come together. This conversation is at the next step. We have to collaborate. It takes everybody.

“This is my charge to everybody: Do what you can. Do what you have to do. Step outside yourself. Be more, be better, be bigger, be better than you ever have been before. If this team is a representation of what you can be when you do that, please take that as an example. This group is incredible. We took so much on our shoulders to be here with you today, to celebrate with you today. And we did it with a smile. So do the same for us.”

Then she ended with classic, mischievous outrageousness: “New York City! You the mother-[expletive] best!!!” 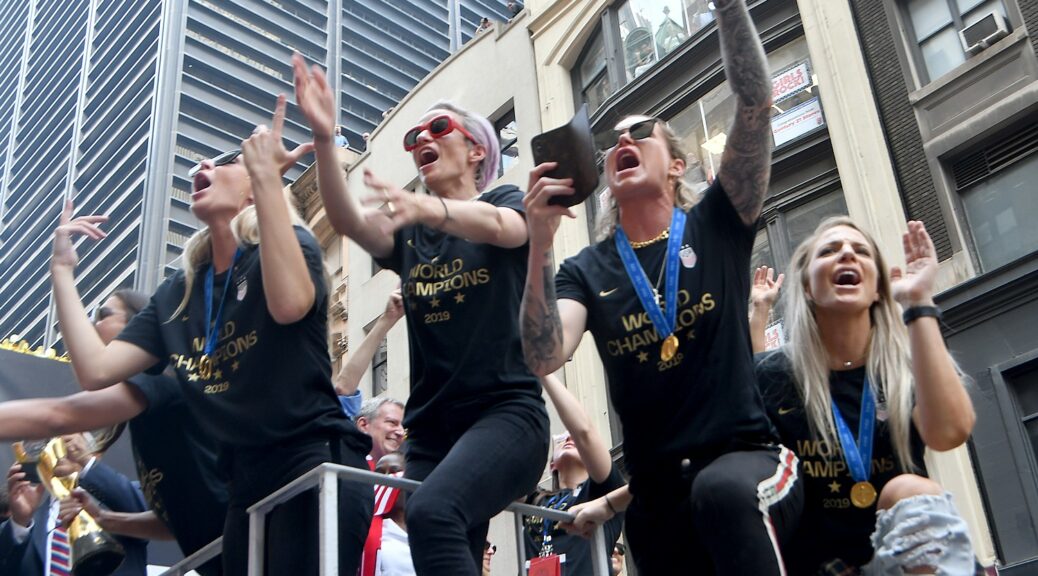 It was a day to celebrate grit, determination, perseverance and pure excellence, as tens of thousands turned out to cheer the United States Women’s National Team on their 2019 World Cup victory as they floated through Lower Manhattan’s “Canyon of Heroes,” the second of the team’s ticker-tape parades, with the first only 2015. Notably, the vast majority of parade watchers were mothers and daughters. They held signs thanking the team for being such wonderful role models, and signs that called for Equal Pay.

Here are highlights from the parade: