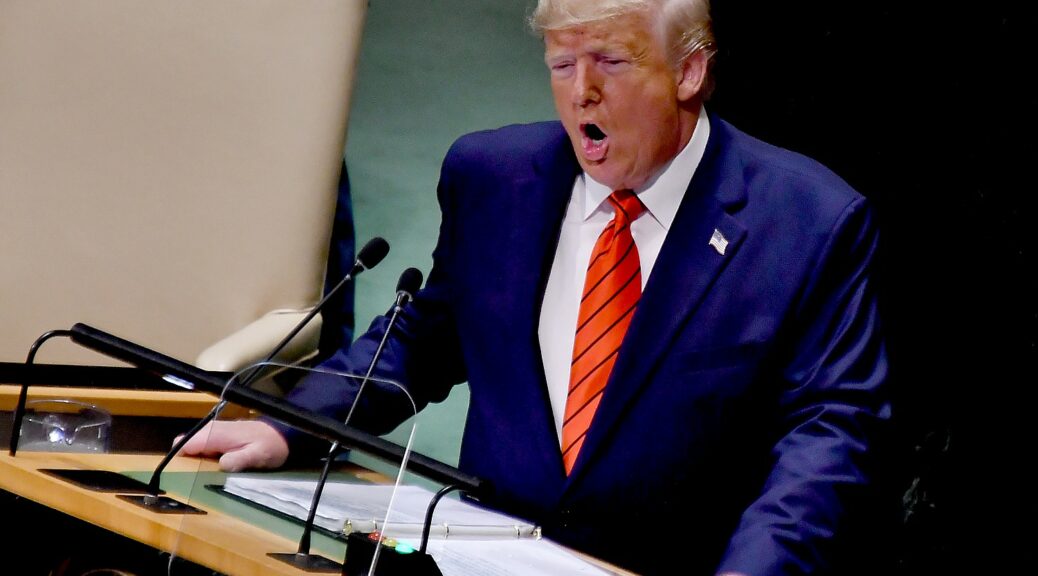 There couldn’t be more divergently contrasting speeches between that of UN Secretary-General Antonio Guterres and US President Donald Trump, even more stark by coming virtually on heels of each other – or then again, between Trump and every other head of state and minister who came to the podium.

“I have the privilege of addressing you today as the elected leader of a nation that prizes liberty, independence and self-government above all,” Trump declared. “The United States, after having spent over two and a half trillion dollars since my election to completely rebuild our great military, is also by far the world’s most powerful nation.”

Coming immediately after the Youth Climate March on Friday which brought out some 4 million people around the world to demand the world’s leaders act to save the habitability of the planet, and the United Nation’s Climate Summit in which over 100 nations (not the United States, but states and regions were represented) gave specifics on programs and achievements in order to prevent the earth from heating more than 1.5 degrees more, Trump boasted that the United States has become the world’s “Number One Producer of Oil and Gas.”

Reprising and expanding upon his America First speech he delivered to the United Nations last year, he attacked anything that might smack of multilateralism, and urged the rest of the world to follow suit.

“If you want democracy, hold on to your sovereignty. And if you want peace, love your nation,” he declared – a statement that defies any reading of history.

Yet, Trump insisted the nations of the world adopt the Trumpian view of “Freedom of Religion”.

“This fundamental right is under growing threat around the world. Hard to believe, but 80 percent of the world’s population lives in countries where religious liberty is in significant danger or even completely outlawed. Americans will never fire or tire in our effort to defend and promote freedom of worship and religion. We want and support religious liberty for all.

“Americans will also never tire of defending innocent life,” he said. “We are aware that many United Nations projects have attempted to assert a global right to taxpayer funded abortion on demand right up until the moment of delivery. Global bureaucrats have absolutely no business attacking the sovereignty of nations that wish to protect innocent life. Like many nations here today, we in America believe that every child born and unborn is a sacred gift from God.”

Defend innocent life – except when it comes to guns.

“There is no circumstance under which the United States will allow international interests to trample on the rights of our citizens, including the right to self-defense. That is why this year I announced that we will never ratify the U.N. Arms Trade Treaty, which would threaten the liberties of law-abiding American citizens. The United States will always uphold our constitutional right to keep and bear arms. We will always uphold our Second Amendment. The core rights and values America defends today were inscribed in America’s founding documents.

“Our nation’s founders understood that there will always be those who believe they are entitled to wield power and control over others. Tyranny advances under many names and many theories, but it always comes down to the desire for domination. It protects not the interests of many, but the privilege of few. Our founders gave us a system designed to restrain this dangerous impulse. They choose to entrust American power to those most invested in the fate of our nation: a proud and fiercely independent people.”

Each year, Trump has to find a boogey-man to attack. In  his first address, he lambasted North Korea’s “Rocket Man” Kim Jong-Un; last year he went after Venezuela. This year, he declared “One of the greatest security threats facing peace-loving nations today is the repressive regime in Iran. The regime’s record of death and destruction is well known to us all. Not only is Iran the world’s number one state sponsor of terrorism, but Iran’s leaders are fueling the tragic wars in both Syria and Yemen.”

As the United Nations raises alarms about the greatest numbers of displaced people around the globe since World War II, Trump tripled down on his hostility and hatred for refugees, asylum-seekers and migrants.

“To anyone conducting crossings of our border illegally, please hear these words: Do not pay the smugglers. Do not pay the coyotes. Do not put yourself in danger. Do not put your children in danger. Because if you make it here, you will not be allowed in. You will be promptly returned home. You will not be released into our country as long as I am president of the United States. We will enforce our laws and protect our borders. For all of the countries of the western hemisphere, our goal is to help people invest in the bright futures of their own nation. Our region is full of such incredible promise, dreams, waiting to be built, and national destinies for all, and they are waiting also to be pursued.” The United States rejected the United Nations Global Migration Compact.

Trump’s speech to the General Assembly, just as his remarks to the “Freedom of Religion” forum the day before, was tailored for his base (and helps explain his eagerness to pal around with India’s Prime Minister Modi, attending the 50,000-strong rally in Houston, despite Modi’s harsh assault on Muslim-majority Kashmir – it is his ticket to the Indian-American vote). In this context, his attack on Venezuela served as his foil for attacking Democrats and their radical ideas about income inequality and universal health care.

Guterres began his speech noting that the United Nations Charter’s first words are “We the Peoples” “It puts people at the center of our work, everyday, everywhere…. people with rights. Those rights are an endowment.”

“Machines take their jobs.  Traffickers take their dignity.  Demagogues take their rights.  Warlords take their lives.  Fossil fuels take their future”, he declared. “And because people still believe in the United Nations, we, the leaders, must deliver. They believe as leaders we will put people first, because we the leaders must deliver for We the Peoples…People have a right to live in peace.”

He cited promising developments, such as peaceful elections in Madagascar and the Democratic Republic of the Congo; the Greece-North Macedonia name dispute resolution; political dialogue in Sudan; and an agreement in Syria. But he spoke of persisting conflicts, terrorism and “the risk of a new arms race growing” across the world, and lamented unresolved situations in Yemen, Libya and Afghanistan; an evasive solution to the Israel-Palestine conflict; Venezuelan displacements; and “the alarming possibility of armed conflict in the Gulf”.

And without actually naming the United States and China, he raised alarm over “a new risk looming on the horizon: the possibility of a great fracture, the world splitting in two, with the two largest economies on earth creating two separate and competing worlds, each with their own dominant currency, trade and financial rules, their own internet and artificial intelligence capacities, and their own zero sum geopolitical and military strategies”.

“We must do everything possible to avert the Great Fracture and maintain a universal system…with strong multilateral institutions”, he stressed.

Guterres encouraged the world leaders to take advantage of the Sustainable Development Goals Summit to “ramp up ambition”.

And he, like every other leader, pointed to the need to aggressively confront Climate Action. Referencing Monday’s Climate Action Summit, the UN chief underscored the importance of adaptation.

Guterres referred to Hurricane Dorian in the Bahamas as he spoke of “unprecedented temperatures, unrelenting storms and undeniable science”.

Though “not fast enough”, the world is starting to move “in the right direction” – away from fossil fuels and towards a green economy, he said.

Turning to fundamental freedoms, the UN chief said, “we are at a critical juncture where advances made across the decades are being restricted and reversed, misinterpreted and mistrusted”.

The Secretary-General pointed to new forms of authoritarianism; narrowing civic spaces; the targeting of activists, human rights defenders and journalists; and expanding surveillance systems that are “shredding the fabric of our common humanity”.

And in direct contradiction to the Trumpian vision of the world order, Guterres said that anything that is done to uphold security and human rights “helps deliver sustainable development and peace”.

“In the 21st century, we must see human rights with a vision that speaks to each and every human being and encompasses all rights”, lauding the 2030 Agenda for Sustainable Development as a tool for social protection, a sustainable environment, education and decent jobs.

These themes were echoed by just about every other leader and representative – except for Donald Trump. Indeed, the rest of the world seems more resolved than ever to work together – basically ignoring the United States.

That is fine with Trump, who thinks of the rest of the world as children trying to tap their Dad for money.

Youth Climate Activist Greta Thunberg to UN Climate Summit: ‘If you choose to fail us, I say we will never forgive you’

Even as millions around the country and the world have been protesting the policies coming down from Donald Trump – the immigration and travel ban, global gag order on women’s health facilities, attacks on environment and climate action, attacking the media, threatening new voter suppression actions (the list goes on and on) – today a senior group of key Trump-Pence campaign, transition, and inauguration leaders announced the formation of America First Policies, a non-profit organization dedicating to advocating the initiatives and policies of the White House.

“As an issue advocacy organization, America First will be dedicated to empowering, educating, and mobilizing tens of millions of Americans who believe in policies that put America First,” the press release stated. “The organization will promote policy, support leaders, coalitions, and other organizations who back America First policies, and communicate directly to citizens – directly challenging the agenda of the liberal and biased media.”

America First Policies will be led by Nick Ayers, Rick Gates, Marty Obst and Brad Parscale – a team who worked closely throughout much of the campaign, transition, and inauguration and have tremendous experience in public policy, issue advocacy, fundraising, and political organization. In addition, David Bossie and Katrina Pierson will also be joining the newly formed entity. The group said it will not accept any donations from federally registered lobbyists.

“President Trump campaigned on a bold but basic concept: America First,” the team said in a joint statement. “This is a concept the American people both understand and support, but few in the media recognize and many politicians beholden to special interests will oppose. We will provide the counter balance. And while our funding will be significant – the most powerful thing this organization can do is harness the power and energy from everyday ordinary Americans, and give them a voice in this process. If their voices are heard, ‘America First’ policies championed by The White House will prevail.”