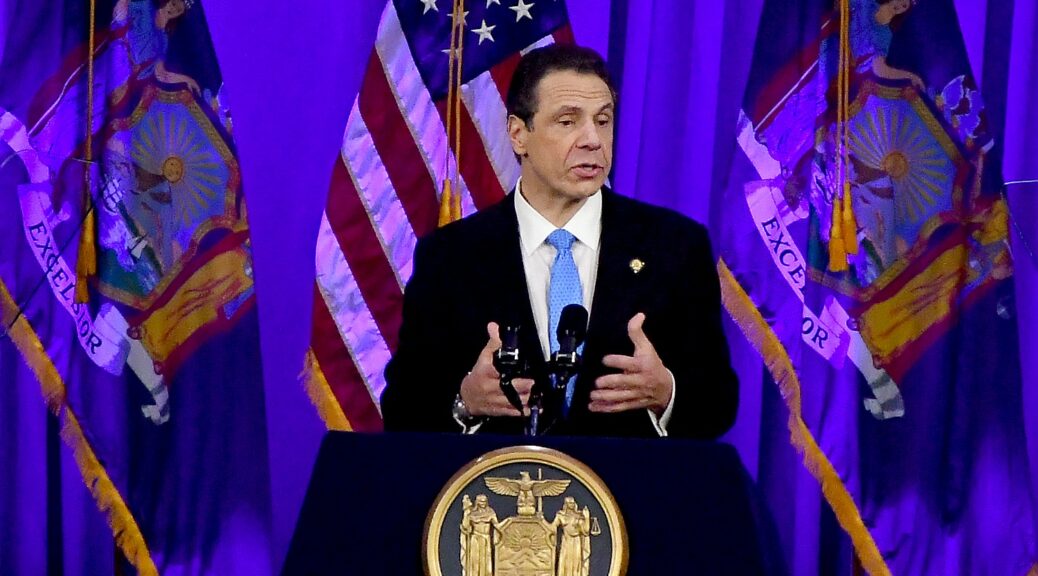 New York State Governor Andrew M. Cuomo took a deserved bow in announcing historic progressive accomplishments during this year’s Legislative Session, delivering on his 2019 Justice Agenda first laid out in December, and calling it “the most productive in modern political history.”

“These sweeping reforms will ensure social and economic justice for all New Yorkers, address the devastating impact of climate change, support New York’s ongoing commitment to workers’ rights, modernize transportation systems across the state, and enhance the Empire State’s nation-leading commitment to gender equity and LGBTQ rights. All of this was done while enacting fiscally responsible policies including holding spending growth to 2 percent for the ninth consecutive year, enacting a permanent property tax cap and cutting taxes for the middle class,” the governor’s office stated.

“Six months ago we laid out our 2019 Justice Agenda – an aggressive blueprint to move New York forward – and today I’m proud to say we got it done,” Governor Cuomo said. “At the end of the day, the only thing that matters is what you accomplish, and this was the most progressively productive legislative session in modern history. The product was extraordinary, and we maintained our two pillars – fiscal responsibility and economic growth paired with social progress on an unprecedented and nation-leading scale.”

Climate Leadership and Community Protection Act: This legislation enacts the Climate Leadership and Community Protection Act, creating the most aggressive climate change program in the nation with goals to: reach zero carbon emissions in the electricity sector by 2040; install 9 GW of offshore wind by 2035; 6GW of solar by 2025; 3 GW of energy storage by 2030; and directs state entities to work toward a goal of investing 40 percent of clean energy and energy efficiency resources to benefit disadvantaged communities. Additionally, the law creates the Climate Action Council comprised of the leaders of various state agencies and authorities as well as legislative appointments to develop a plan outlining how the state will achieve an 85% reduction in GHG emissions from 1990 levels by 2050, and eventually net zero emissions in all sectors of the economy.

Permanent Property Tax Cap: Made permanent the 2% property tax cap, building upon the approximate $25 billion in taxpayer savings since it was implemented in 2012.

MTA Money and Management: Funded the MTA with an estimated $25 billion raised through Central Business District tolling, a new progressive mansion tax, and the elimination of the internet tax advantage. Implemented overdue MTA reforms including the developing a reorganization plan, modifying MTA Board appointments to align with appointing authority, requiring the MTA to undergo an independent forensic audit and efficiency review, and calling for a major construction review unit made up of outside experts to review major projects.

Advancing LGBTQ Rights: Governor Cuomo is enacting transformative legislation in support of LGBTQ rights, including the elimination of the gay and trans panic defense—closing a loophole in state law that allowed individuals to use the gay and trans panic defenses after attacking another based upon that victim’s gender, gender identity, or sexual orientation. The Governor also enacted into law the Gender Expression Non-Discrimination Act (GENDA) and a ban on LGBTQ conversion therapy.

Establish a Farmworkers Bill of Rights: This legislation established a farmworkers bill of rights, granting overtime pay, a rest day and the right to unionize.

Enact Additional Sexual Harassment Protections: This package of reforms will lower the high bar set for employees to hold employers accountable under the New York Human Rights Law for sexual harassment by amending the requirement that conduct be “severe or pervasive” to constitute actionable conduct; extend the statute of limitations for employment sexual harassment claims filed with the Division of Human Rights from one year to three years; and protect employees’ rights to pursue complaints by mandating that all non-disclosure agreements in employment contracts include language stating that employees may still participate in government investigations conducted by local, state, and federal anti-discrimination agencies

Expand Statutes of Limitations for Rape: Statutes of limitations on rape cases impose a ticking clock on how long victims are able to come forward if they want to seek charges. Over the last year, victims who have suffered in silence for decades have bravely spoken about their abuse, and also have laid bare the state’s limited ability to prosecute their abusers due to the passage of time. In recognition of this fact, states across the country are lengthening or eliminating the statutes of limitations on crimes of sexual violence. This legislation extends the statute of limitations for Rape in the Second Degree and Third Degree, and expand the civil statute of limitations for claims related to these offenses, allowing victims greater opportunity to obtain justice.

Closing the Gender Wage Gap: Since taking office, Governor Cuomo has fought aggressively to increase safeguards for women in the workplace and close the gender pay gap in New York. This package of reforms includes legislation to expand the definition of “equal pay for equal work” to prohibit unequal pay on the basis of a protected class for all substantially similar work and to close any loopholes employers try to use to pay people less on the basis of their gender, race or other protected classes; as well as a salary history ban, which prohibits employers from asking or relying on salary history of applicants and employees in making job offers or determining wages.

Reauthorize and Expand the MWBE Program: The Minority and Women-Owned Business Enterprise program has been highly successful since its inception, establishing the highest goals for MWBE participation in the entire nation and awarding thousands of state contracts to minority-owned and women-owned businesses. This legislation reauthorizes the MWBE program and extends the provisions of law relating to the participation of MWBEs in state contracts to ensure this effective program continues.

Tenant Protections: This package of reforms, known as Housing Stability and Tenant Protection act of 2019, enacts the most sweeping, aggressive tenant protections in state history, safeguarding affordable housing for millions of New Yorkers.

Remove the Non-Medical Exemptions for Vaccines: The United States is currently experiencing the worst outbreak of measles in more than 25 years, with outbreaks in pockets of New York primarily driving the crisis. As a result of non-medical vaccination exemptions, many communities across New York have unacceptably low rates of vaccination, and those unvaccinated children can often attend school where they may spread the disease to other unvaccinated students. This new law will remove non-medical exemptions from school vaccination requirements for children and help protect the public amid this ongoing outbreak.

Ensuring Quality Education: School aid increased by over $1 billion, bringing total school aid to a record $27.9 billion. In addition, new reporting requirements will address imbalances in the distribution of resources by prioritizing funding at the individual school level in order to advance a more transparent, equitable education system.

Makes the Jose R. Peralta DREAM Act a Reality: Finally opens the doors of higher education to thousands of New Yorkers by giving undocumented New York students the same advantages given to their citizen peers, including access to the Tuition Assistance Program and state administered scholarships such as Excelsior.

Expands Eligibility for the Excelsior Scholarship Free Tuition Program: As the state’s successful free tuition program enters its third year, students whose families make up to $125,000 annually will now be eligible to apply for the program, allowing more than 55 percent of full-time, in-state SUNY and CUNY students—or more than 210,000 New York residents—to attend college tuition-free when combined with TAP assistance.

Criminal Justice Reform: Sweeping criminal justice reform was delivered by eliminating cash bail for misdemeanors and non-violent offenses, ensuring the right to a speedy trial, and transforming the discovery process.

Continued Investment in Infrastructure: Builds upon the Governor’s unprecedented commitment to invest $150 billion in infrastructure projects over the next five years.

Delivering on the Gateway Tunnel Project: This legislation establishes the Gateway Development Commission and creates a comprehensive rail investment program for purposes of the project. This bi-state effort, in cooperation with New Jersey, represents significant progress on a crucial project for our nation’s economy and security while restoring our role as a global leader in infrastructure.

Protecting the Environment: The launch of the Green New Deal—the most aggressive environmental protection initiative in the nation, the ban of single-use plastic bags, launch of the food waste recycling program and investment of an additional $500 million in clean water infrastructure, increasing the State’s historic investment to $3 billion, all of which serves to protect New Yorkers while combatting some of the most pressing threats to the environment.

Keeping New Yorkers Healthy: By codifying provisions of the Affordable Care Act, New Yorkers can rest assured that their health needs will be covered, regardless of Washington’s actions.

Supporting Workers’ Rights: Extended Janus protections to all local governments and guaranteed the right to organize and collectively bargain.

Common Sense Gun Reform: Building upon the SAFE Act—the strongest gun control legislation in the country—additional measures were enacted this year to ensure guns were kept out of the wrong hands, including the Red Flag Bill, ban on bump stocks, and extending the background check waiting period.

Signing the Child Victims Act: The signing of this long-awaited legislation provided necessary relief to child victims of sexual abuse by amending New York’s antiquated laws to ensure that perpetrators are held accountable for their actions, regardless of when the crime occurred.

Closing the LLC Loophole: Closed the LLC loophole by limiting political spending by an LLC to a total of $5,000 annually, which is the same limit as corporations. The new law also requires the disclosure of direct and indirect membership interests in the LLC making a contribution, and for the contribution to be attributed to that individual.