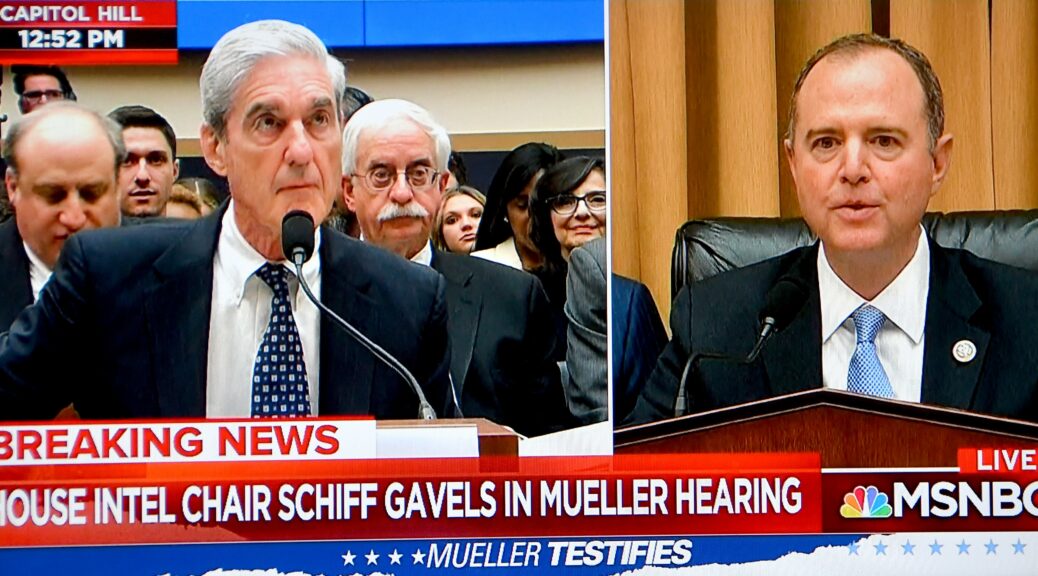 House Intelligence committee Chair Adam Schiff (D-CA), in his opening and closing statements for the historic hearings on July 24, 2019, set out the significance of the findings of Special Counsel Robert Mueller’s investigation into Russian interference in the 2016 Election, and the ramifications of the government’s failure to prevent such interference in future elections.

“When asked, ‘If the Russians intervene again, will you take their help, Mr. President?” ‘Why not?’ was the essence of his answer. ‘Everyone does it.’

“No, Mr. President, they don’t. Not in the America envisioned by Jefferson, Madison and Hamilton. Not for those who believe in the idea that Lincoln labored until his dying day to preserve, the idea animating our great national experiment, so unique then, so precious still, that our government is chosen by our people, through our franchise, and not by some hostile foreign power.

“This is what is at stake, our next election, and the one after that for generations to come. Our democracy.”

Here is the text of his opening and closing statements: – – Karen Rubin, News & Photo Features

Your report, for those who have taken the time to study it, is methodical and it is devastating, for it tells the story of a foreign adversary’s sweeping and systemic intervention in a close U.S. presidential election.

That should be enough to deserve the attention of every American, as you well point out. But your report tells another story as well. The story of the 2016 election is also a story about disloyalty to country, about greed, and about lies.

Your investigation determined that the Trump campaign, including Donald Trump himself, knew that a foreign power was intervening in our election and welcomed it, built Russian meddling into their strategy and used it.

Disloyalty to country. Those are strong words, but how else are we to describe a presidential campaign which did not inform the authorities of a foreign offer of dirt on their opponent, which did not publicly shun it or turn it away, but which instead invited it, encouraged it and made full use of it?

That disloyalty may not have been criminal. Constrained by uncooperative witnesses, the destruction of documents and the use of encrypted communications, your team was not able to establish each of the elements of the crime of conspiracy beyond a reasonable doubt, so not a provable crime in any event.

But I think maybe something worse: The crime is the violation of law written by Congress. But disloyalty to country violates the very oath of citizenship, our devotion to a core principle on which our nation was founded that we, the people and not some foreign power that wishes us ill, we decide who governs us.

This is also a story about money, and about greed and corruption. About the leadership of a campaign willing to compromise the nation’s interest not only to win, but to make money at the same time.

About a campaign chairman indebted to pro-Russian interests who tried to use his position to clear his debts and make millions. About a national security advisor using his position to make money from still other foreign interests.

And about a candidate trying to make more money than all of them put together through real estate project that to him was worth a fortune, hundreds of millions of dollars and the realization of a life-long ambition, a Trump Tower in the heart of Moscow. A candidate who, in fact, viewed his whole campaign as the greatest infomercial in history.

Donald Trump and his senior staff were not alone in their desire to use the election to make money. For Russia, too, there was a powerful financial motive. Putin wanted relief from U.S. economic sanctions imposed in the wake of Russia’s invasion of Ukraine and over human rights violations.

That is where your report ends, Director Mueller, with a scheme to cover up, obstruct and deceive every bit as systematic and pervasive as the Russian disinformation campaign itself, but far more pernicious since this rot came from within.

Even now after 448 pages and two volumes, the deception continues. The president and his accolades say your report found no collusion, though your report explicitly declined to address that question, since collusion can involve both criminal and noncriminal conduct.

Your report laid out multiple offers of Russian help to the Trump campaign, the campaign’s acceptance of that help, and overt acts in furtherance of Russian help. To most Americans that is the very definition of collusion, whether it is a crime or not.

They say your report found no evidence of obstruction, though you outlined numerous actions by the president intended to obstruct the investigation.

They say the president has been fully exonerated, though you specifically declare you could not exonerate him.

But worst of all, worse than all the lies and the greed, is the disloyalty to country, for that, too, continues.

When asked, “If the Russians intervene again, will you take their help, Mr. President?” “Why not?” was the essence of his answer. “Everyone does it.”

No, Mr. President, they don’t. Not in the America envisioned by Jefferson, Madison and Hamilton. Not for those who believe in the idea that Lincoln labored until his dying day to preserve, the idea animating our great national experiment, so unique then, so precious still, that our government is chosen by our people, through our franchise, and not by some hostile foreign power.

This is what is at stake, our next election, and the one after that for generations to come. Our democracy.

This is why your work matters, Director Mueller. This is why our investigation matters, to bring these dangers to light.

Director Mueller, let me close by returning to where I began. Thank you for your service and thank you for leading this investigation. The facts you set out in your report and have elucidated here today tell a disturbing tale of a massive Russian intervention in our election, of a campaign so eager to win, so driven by greed, that it was willing to accept the help of a hostile foreign power, and a presidential election decided by a handful of votes in a few key states.

Your work tells of a campaign so determined to conceal their corrupt use of foreign help that they risked going to jail by lying to you, to the FBI and to Congress about it and, indeed, some have gone to jail over such lies. And your work speaks of a president who committed countless acts of obstruction of justice that in my opinion and that of many other prosecutors, had it been anyone else in the country, they would have been indicted.

Notwithstanding, the many things you have addressed today and in your report, there were some questions you could not answer given the constraints you’re operating under. You would not tell us whether you would have indicted the president but for the OLC only that you could not, and so the Justice Department will have to make that decision when the president leaves office, both as to the crime of obstruction of justice and as to the campaign finance fraud scheme that individual one directed and coordinated and for which Michael Cohen went to jail.

You would not tell us whether the president should be impeached, nor did we ask you since it is our responsibility to determine the proper remedy for the conduct outlined in your report. Whether we decide to impeach the president in the House or we do not, we must take any action necessary to protect the country while he is in office.

You would not tell us the results or whether other bodies looked into Russian compromise in the form of money laundering, so we must do so. You would not tell us whether the counterintelligence investigation revealed whether people still serving within the administration pose a risk of compromise and should never have been given a security clearance, so we must find out.

We did not bother to ask whether financial inducements from any gulf nations were influencing this U.S. policy, since it is outside the four corners of your report, and so we must find out.

One thing is clear from your report, your testimony from Director Wray’s statements yesterday, the Russians massively intervened in 2016, and they are prepared to do so again in voting that is set to begin a mere eight months from now.

The president seems to welcome the help again. And so, we must make all efforts to harden our election’s infrastructure to ensure there is a paper trail for all voting, to deter the Russians from meddling, to discover it when they do, to disrupt it, and to make them pay.

Protecting the sanctity of our elections begins, however, with the recognition that accepting foreign help is disloyal to our country, unethical, and wrong. We cannot control what the Russians do, not completely, but we can decide what we do and that the centuries old experiment we call American democracy is worth cherishing.