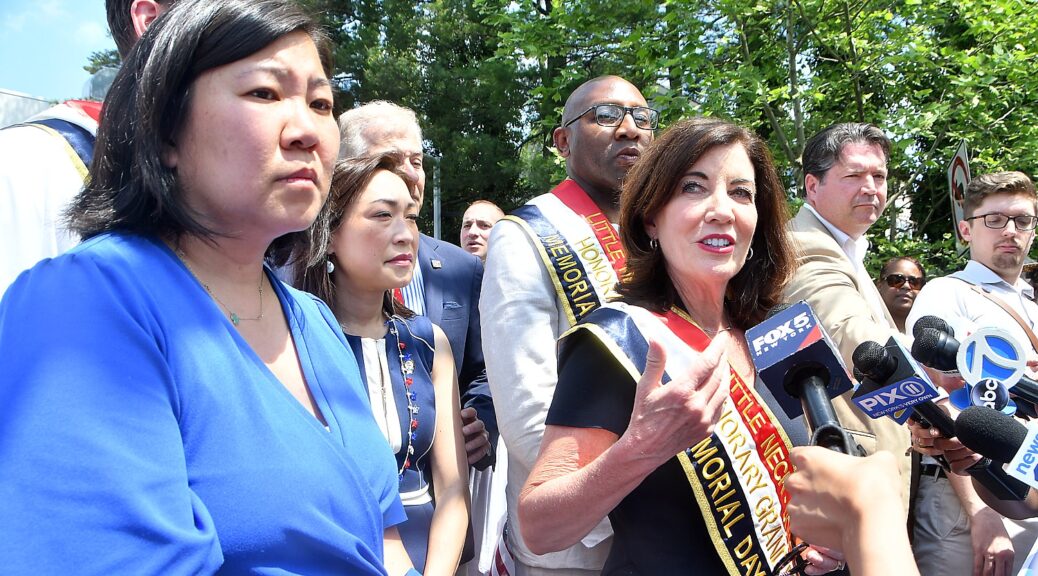 Even as President Joe Biden was appealing to Congress to finally act to end the scourge of gun violence that is taking more than 100 lives each day and has become the leading cause of death for children, New York State was passing a package of gun safety bills to further strengthen the state’s already stiff gun control laws. The action came just days after an 18-year old white supremacist, armed with an AR 15 assault weapon murdered 10 in a grocery store in a predominantly black neighborhood of Buffalo, followed closely by the massacre at the Uvalde, Texas elementary school, and then another at a Tulsa hospital. Meanwhile, the state awaits the radical rightwing Supreme Court majority’s decision on a case deciding whether New York can give criteria for someone to have a gun permit. Governor Kathy Hochul has said she would call the state Legislature back into session to adopt new gun laws should that happen.

Immediately following the State Legislature’s adoption of its package of gun laws, Governor Hochul stated, “Just last night a deadly semiautomatic weapon was once again used to mercilessly kill innocent civilians, this time at a medical facility in Oklahoma. It was a scene all too familiar in this country, one we’ve seen everywhere from Uvalde, to Sandy Hook, to Parkland, to my hometown of Buffalo. We cannot keep living like this.

“We cannot be satisfied by New York’s already tough gun laws. Shooting after shooting makes it clear that they must be even stronger to keep New Yorkers safe. This comprehensive package will close loopholes, give law enforcement the tools they need to prevent easy access to guns, and stop the sale of dangerous weapons to 18-year-olds. I am grateful to Majority Leader Stewart-Cousins, Speaker Heastie, and our partners in the legislature, and I look forward to signing these bills into law.

“Even as we take action to protect New Yorkers, we recognize that this is a nationwide problem. I once again urge Congress to seize this moment and pass meaningful gun violence prevention measures. We have no time to waste.”

New Yorkers Against Gun Violence (NYAGV), a statewide advocacy organization, applauded the New York State Senate and New York State Assembly for passing a package of 10 gun safety bills this week.  The bills, which are expected to be signed by Governor Kathy Hochul, will require microstamping technology for all semi-automatic pistols, expand New York’s Extreme Risk Protection Order law, improve oversight and regulation of gun dealers, require a license to purchase or possess a semi-automatic rifle, and other measures that will prevent gun violence and mass shootings.

The passage of this gun bill package comes on the heels of a scourge of gun violence and mass shootings during April and May across the state and country, including in Brooklyn and Buffalo, New York and Uvalde, Texas, and as recently as last night, in Tulsa, Oklahoma, among numerous other gun violence incidents.

Rebecca Fischer, NYAGV Executive Director said, “Faced with a surging gun violence crisis, the New York State Legislature has once again made it a priority this week to protect New Yorkers by passing a strong, life-saving slate of gun violence prevention bills.  These measures will help keep guns away from people in crisis to prevent mass shootings, suicide and other gun violence, will require a license to purchase or possess a semi-automatic rifle anywhere in this state, and will provide law enforcement with microstamping tracing technology to stop gun trafficking and hold rogue gun dealers accountable. As New Yorkers and Americans, we should not have to fear gun violence on a daily basis in our neighborhoods or homes, in our subways, our supermarkets, our schools, our houses of worship, our hospitals, or anywhere else.  While Congress continues to stall on meaningful national gun reform, we are grateful to have outstanding gun violence prevention champions leading our state government who are committed to keeping our children and all New Yorkers safe.”

A.1023-A (Paulin)/S.4970-A (Kavanagh): Requires all state and local law enforcement agencies to report seized or recovered guns to the criminal gun clearinghouse; participate in ATFs collective data sharing program; test-fire seized or recovered guns for national integrated Ballistic Information Network; and enter the make, model, caliber, and serial number of the gun into the national crime information center. Also requires gun dealers to implement a security plan for securing firearms, rifles and shotguns; prohibit persons under eighteen and not accompanied by a parent from the certain locations of a gun dealer’s premises; provide training to all employees on the conduct of firearm, rifle, and shotgun transfers, including identification of and response to illegal purchases; adhere to record keeping requirements; and require the State police to conduct inspections of gun dealers every three years.

A.10501 (Meeks)/S. 9465 (Bailey): Creates a new Task Force on Social Media and Violent Extremism in the Attorney General’s office to study and investigate the role of social media companies in promoting and facilitating violent extremism and domestic terrorism online.

A10503 (Jackson)/S. 9458 (Thomas): Requires that an individual obtain a license prior purchasing a semiautomatic rifle. This is prospective and applies to purchases made on and after the effective date.

A7865-A (Fahy)/ S.4511-A (Kaplan): Requires social media networks in New York to provide a clear and concise policy regarding how they would respond to incidents of hateful conduct on their platform and maintain easily accessible mechanisms for reporting hateful conduct on those platforms

A.10428-A (People-Stokes)/S.9229-A (Hoylman): Eliminates the grandfathering of large capacity ammunition feeding devices that were lawfully possessed prior to the enactment of the Safe Act or manufactured prior to 1994.

A. 10497 (Jacobson)/S.9407-B (Kavanagh): Makes unlawful the purchase and sale of body vests for anyone who is not engaged in an eligible profession. Eligible professions include law enforcement officers and other professions designated by the Department of State in consultation with other agencies. Also requires that any sale of a body vest be done in person.

A. 10504 (Burgos)/S. 9456 (Sepulveda): Expands the definition of a “firearm” to include any weapon not defined in the Penal Law that is designed or may readily be converted to expel a projectile by action of an explosive. This is intended to capture firearms that have been modified to be shot from an arm brace, which are evading our current definitions of firearms and rifles.