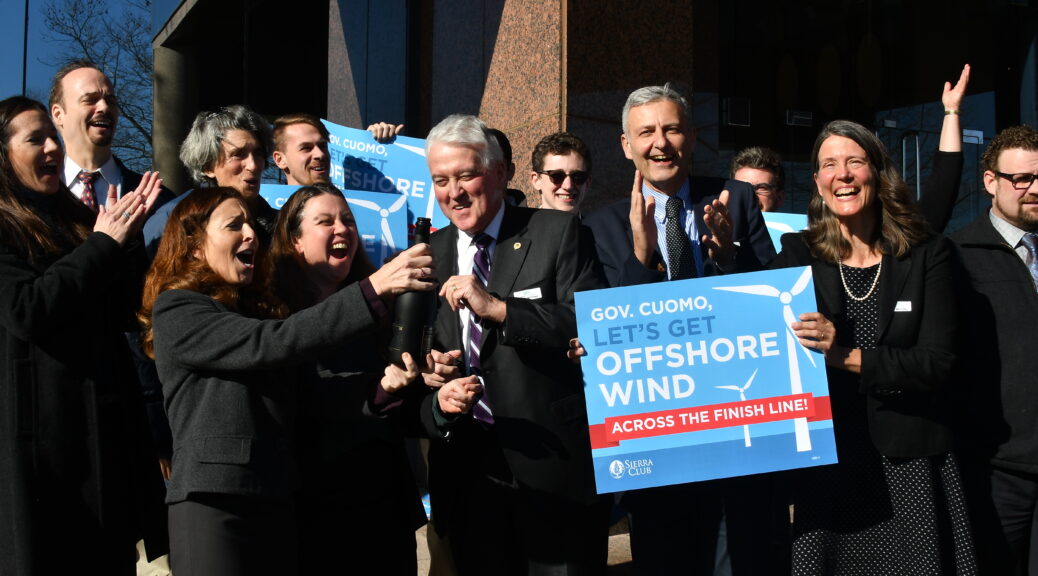 WASHINGTON — Secretary of the Interior Deb Haaland announced today that the Bureau of Ocean Energy Management (BOEM) will hold a wind auction next month for more than 480,000 acres offshore New York and New Jersey, in the area known as the New York Bight. Secretary Haaland was joined by New Jersey Governor Phil Murphy, New York Governor Kathy Hochul, and Liz Shuler, President of the American Federation of Labor and Congress of Industrial Organizations, to highlight what will be the first offshore wind lease sale under the Biden-Harris administration.

The Feb. 23 auction will allow offshore wind developers to bid on six lease areas – the most areas ever offered in a single auction – as described in BOEM’s Final Sale Notice. Leases offered in this sale could result in 5.6 to 7 gigawatts of offshore wind energy, enough to power nearly 2 million homes. As offshore wind technology continues to advance, these areas may have the potential to produce even more clean energy.

“The Biden-Harris administration has made tackling the climate crisis a centerpiece of our agenda, and offshore wind opportunities like the New York Bight present a once-in-a-generation opportunity to fight climate change and create good-paying, union jobs in the United States,” said Secretary of the Interior Deb Haaland. “We are at an inflection point for domestic offshore wind energy development. We must seize this moment – and we must do it together.”

On today’s call, the leaders outlined a shared vision for developing a robust offshore wind domestic supply chain that will deliver benefits to residents of New York and New Jersey and the surrounding region, including underserved communities. This collaboration will serve as a model for future engagement and establish the U.S. as a major player in the global offshore wind market.

“Offshore wind holds the tremendous promise for our future in terms of climate change, economic growth, strengthening our work force, and job creation,” said Governor Phil Murphy. “New Jersey is already committed to creating nearly one-quarter of the nation’s offshore wind-generation market and these transformative projects are proof that climate action can drive investments in infrastructure and manufacturing, while creating good-paying, union jobs. By acting on this this shared vision, we can promote our joint offshore wind goals, and deliver benefits to residents of both states, particularly those in overburdened communities. Together, with this critical cooperation with the Biden-Harris administration and our state partners, we will turn this vision of becoming a leader in the global offshore wind market into a reality.”

“Here in New York, we are already living with the disastrous effects of climate change through extreme weather that pose a direct threat to our way of life,” said Governor Hochul. “We must chart an ambitious path toward a cleaner energy economy now more than ever, and today’s milestone further highlights New York’s commitment creating a greener tomorrow. This effort will require collaboration at all levels, and I applaud the Biden Administration for their action and thank Secretary Haaland and BOEM, as well as New Jersey Governor Murphy, for their partnership as we confront the climate crisis.”

A recent report indicates that the United States’ growing offshore wind industry presents a $109 billion opportunity in revenue to businesses in the supply chain over the next decade.

The New York Bight offshore wind auction will include several innovative lease stipulations designed to promote the development of a robust domestic U.S. supply chain for offshore wind and enhance engagement with Tribes, the commercial fishing industry, other ocean users, and underserved communities. The stipulations will also advance flexibility in transmission planning and make use of project labor agreements throughout the construction of offshore wind projects. Stipulations include incentives to source major components domestically – such as blades, turbines, and foundations – and to enter into project labor agreements to ensure projects are union-built.

To advance the Department’s environmental justice and economic empowerment goals, the Sale Notice also requires lessees to identify Tribes, underserved communities and other ocean users who could be affected by offshore wind development. The Interior Department will hold companies accountable for improving their engagement, communication and transparency with these communities.

These additions are intended to promote offshore wind development in a way that coexists with other ocean uses and protects the ocean environment, while also facilitating our nation’s energy future for generations to come.

BOEM initially asked for information and nominations of commercial interest for 1,735,154 acres in the Bight. Based on the bureau’s review of scientific data, and extensive input from the commercial fishing industry, Tribes, partnering agencies, key stakeholders, and the public, BOEM reduced the acreage by 72% to avoid conflicts with ocean users and minimize environmental impacts. BOEM will continue to engage with stakeholders as the process unfolds.

More information about the auction, lease stipulations, list of qualified bidders for the auction and Interior’s collaboration with New York and New Jersey can be found on BOEM’s website.

The Biden-Harris administration catalyzed the offshore wind industry by announcing the first-ever national offshore wind energy goal, creating a clear vision for the future of this innovative industry. This goal is reinforced by the Bipartisan Infrastructure Law, which will make robust investments in sustainable economies, clean energy, and climate resilience.

The Administration has already made significant progress toward creating a pipeline of projects. It has approved the nation’s first two commercial-scale offshore wind projects in federal waters: the 800-megawatt Vineyard Wind project (approved on May 11, 2021) and the 130-megawatt South Fork Wind project (approved on November 24, 2021). BOEM expects to review at least 16 plans to construct and operate commercial offshore wind energy facilities by 2025, which would represent more than 22 GW of clean energy for the nation.

This past fall Secretary Haaland announced a new leasing path forward, which identified up to seven potential lease sales by 2025, including the New York Bight and offshore the Carolinas and California later this year, to be followed by lease sales for the Central Atlantic, Gulf of Maine, the Gulf of Mexico, and offshore Oregon.

In addition, Governor Hochul announced plans to invest in offshore wind infrastructure, procure enough wind energy to power at least 1.5 million homes, initiate planning for an offshore wind transmission network, and launch the offshore wind Master Plan 2.0 Deep Water in her 2022 State of the State address. This will ensure that the state has the strongest offshore wind energy market along the Eastern Seaboard. The Governor’s plan for offshore wind will support more than 6,800 jobs, a combined economic impact of $12.1 billion statewide, and more than 4.3 gigawatts of energy, enough to power nearly 3 million homes in New York.