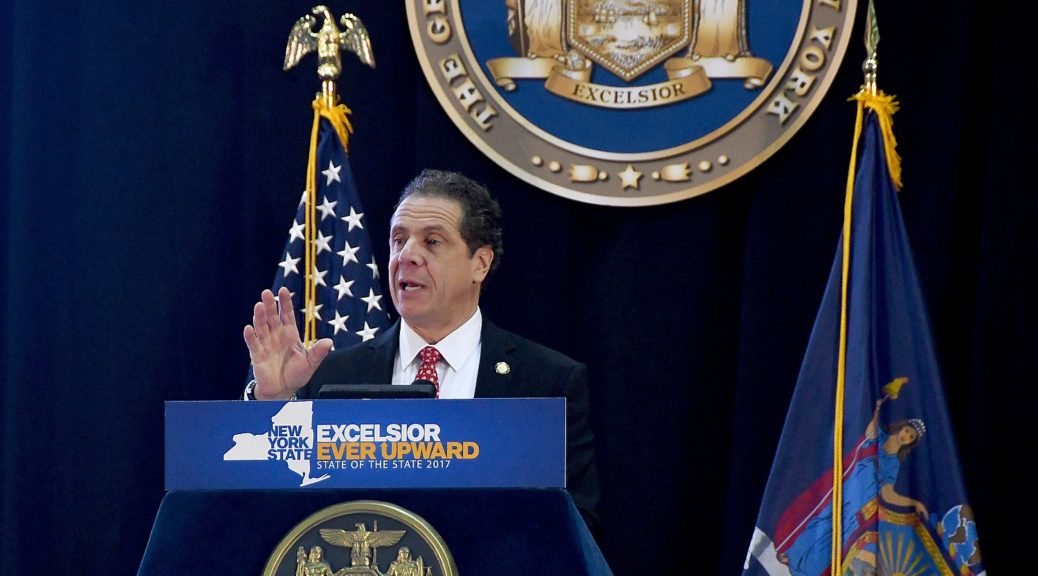 Governor Andrew M. Cuomo signed legislation to remove guns from domestic abusers and close a loophole in state law that will ensure domestic abusers are required to surrender all firearms, not just handguns. The Governor also announced he is advancing new legislation to extend the waiting period for individuals who are not immediately approved to purchase a firearm through the National Instant Criminal Background Check System from three days to 10 days.

“In a time when gun violence continues to relentlessly torment communities across the country while our federal government refuses to act, New York must lead the charge to end this epidemic once and for all,” Governor Cuomo said. “With this legislation, we can sever the undeniable connection between domestic abuse and deadly gun violence, and continue to build upon the strongest gun laws in the nation.”

“My mother dedicated her life to helping victims of domestic violence and our family started a home to help these survivors,” said Lieutenant Governor Kathy Hochul.“We’ve seen firsthand the fear created when a gun is present in the home of an abuser. This new law today is a dramatic step forward eliminating the vulnerability of these women and their children. While the federal government fails to address the issue of gun violence, we continue to fight to keep guns out of the hands of those who could devastate our communities and our residents.”

Previously, New York law narrowly prohibited the possession of firearms for individuals either convicted of a felony or a limited number of misdemeanor “serious” offenses, excluding many misdemeanor offenses that are undeniably serious. This bill (S.8121 Phillips/A10272 O’Donnell), which the Governor signed in ceremony today, expands the list of “serious” crimes that require the loss of a gun license and the surrender of all firearms to ensure no domestic abuser in New York retains the ability to possess a firearm once convicted of a disturbing crime.

In addition, this legislation will preclude any individual wanted for a felony or other serious offense from obtaining or renewing a firearm license. Under previous New York law, despite being subject to an arrest warrant, an individual was still legally eligible to obtain a firearm license even as police worked to locate and detain them. This change ensures that the law enforcement who are actively seeking to arrest a wanted individual, as well as innocent bystanders, are not needlessly endangered by a wanted individual who has been able to obtain new firearms.

Governor Cuomo has introduced legislation to establish a 10-day waiting period for individuals who are not immediately approved to purchase a firearm through the National Instant Criminal Background Check System. Current federal law requires gun dealers to conduct the NICS background check on a potential purchaser prior to selling a firearm, which immediately provides the dealer with one of three possible notifications. These notifications include “proceed”, “denied”, or “delayed”. In the case of a “delayed” response, the dealer must wait three days before the sale is eligible to go through, even though the FBI continues to investigate these individuals past the three-day timeframe. Oftentimes, by the time it has been determined that the potential purchaser was, in fact, ineligible, the individual has already been sold the firearm upon completion of the three-day waiting period. Extending the waiting period to ten days would allow sufficient time to complete the expanded background check and builds on legislative efforts to ensure that only those eligible to own a firearm are able to do so.

House Democratic Leader Nancy Pelosi said, “Today, New York continues its inspirational leadership in addressing the gun violence epidemic by enacting legislation that recognizes the deadly connection between intimate partner abuse and the tragedy of gun violence. Yet, while New York leads, Republicans in Congress refuse to act. As gun violence and domestic abuse exact a daily toll of horror and heartbreak in communities across the country, saving lives and protecting families shouldn’t be a partisan issue. Democrats know that there is a commonsense, bipartisan path forward and we will continue to press for progress on this critical issue.”

Congressman Jerrold Nadler said, “I am proud to stand with Governor Cuomo as he signs legislation to remove all guns from domestic abusers. These measures will close dangerous loopholes in our gun laws and enhance public safety. There is simply no reason why one who has committed an act of domestic violence should maintain ownership of a firearm. Since the Republican Congress has failed to address the national epidemic of gun violence, I commend Governor Cuomo’s leadership in working to enact reasonable gun safety legislation that will protect New Yorkers.”

Congresswoman Carolyn B. Maloney said, “We know that individuals with a history of domestic violence are five times more likely to murder an intimate partner when a firearm is in the house. This bill, to remove guns from domestic abusers, is just commonsense. I was proud to stand with Governor Cuomo today as he signed this important bill that will save lives into law.”

Congresswoman Nydia M. Velázquez said, “Gun violence is a plague on our nation and our city that too often shatters lives. The steps being announced today will help keep firearms away from those who should never have access to them. We must do more and Congress must act at the federal level. Nonetheless this effort is a good start and shows New York is leading the way to tackle this horrible problem.”

Connie Neal, Executive Director of the New York State Coalition Against Domestic Violence said, “The connections between domestic violence and gun violence cannot be clearer. We applaud Governor Cuomo and the members of the New York State Legislature who voted to take a strong stand to remove firearms from domestic violence offenders. The urgency to act was irrefutable, and New York has now made a significant step forward in preventing domestic violence homicides. Because of Governor Cuomo’s leadership, we will now have a strong safeguard in place for protecting countless New Yorkers.”

Kris Brown, Co-President of the Brady Campaign to Prevent Gun Violence said, “The numbers are very clear. Abused women are five times more likely to be killed if their abuser owns a firearm, and domestic violence assaults involving a gun are far more likely to end in death. By requiring domestic abusers to surrender their firearms, Governor Cuomo closed a glaring loophole in state law. I applaud the Governor’s action, as his advocacy for common sense gun laws will help save the lives of vulnerable people all across our state and prevent family fire.”

“As our nation grapples with how to confront the spread of gun violence, we are proud to work and live in a State who has such a leader on this issue: Governor Cuomo,” said Amy Barasch, Executive Director of Her Justice. “At Her Justice, where we provide free legal assistance to thousands of victims of partner violence every year, we know all too well how dangerous guns are in the context of abuse in the home. This new legislation will ensure guns are taken out of the hands of more convicted domestic abusers. Thank you, Governor, for moving us forward.”

Cicely Fields, Domestic and Gun Violence Survivor said, “As a domestic violence survivor, I am a living testimony to why the signing of this bill today is so important. I know firsthand the connection between domestic violence and gun violence is undeniable, as my abuser was able to possess a firearm that injured me within inches of my life. The wound may have healed, but I will still be physically damaged for the rest of my life and my four children, who rely on me for support, will continue to suffer due to the actions of this domestic abuser. I thank Governor Cuomo for ensuring the passage of this law.”

June Rubin, Volunteer Co-Leader for the New York Chapter of Moms Demand Action for Gun Sense in America said, “Today we took another important step towards protecting New Yorkers from gun violence. While this is a meaningful day, we know this legislation is just one of many steps needed to prevent future acts of gun violence. We look forward to working with lawmakers and Governor Cuomo on future steps such as the passage of lifesaving Extreme Risk Protection Order legislation.”

“Under previous law, where people convicted of a domestic violence misdemeanor were able keep their firearms, the lives of both their victims and the general public were unnecessarily put at risk,” Rebecca Fischer, Executive Director of New Yorkers Against Gun Violence said. “Thanks to Governor Cuomo, this legislation ensures that everyone convicted of a domestic violence crime is held to the same standard, guaranteeing that these dangerous individuals will lose their gun license and their firearms. This is common sense legislation that was long overdue, and we applaud the Governor for seeing it through.”

“Domestic violence victims are five times more likely to be killed when their abuser owns a firearm,” Senator Elaine Phillips said. “I thank the Governor for signing this legislation into state law, which requires the removal of firearms from individuals convicted of domestic violence. This commonsense legislation keeps firearms out of the hands of those who are convicted of domestic violence, closes the gap in federal law, protects women, men and children from their abusers and will prevent further tragedies.”

Senator Diane Savino said, “This legislation continues our work to strengthen New York State’s nation-leading gun laws. We are closing a loophole that allowed people convicted of a domestic violence misdemeanor to keep their firearms, and by doing so we are further protecting the victims of domestic violence across this state. No one should have to live in fear of their abusers, and thanks to working with Governor Cuomo on this legislation, we are helping to ensure that they no longer have to.”

Under Governor Cuomo, New York has passed the strongest gun control laws in the nation and with the passing of this legislation, New York’s gun laws have been further strengthened to ensure that the well-known link between domestic abuse and deadly gun violence can be eliminated. In nine of the 10 deadliest mass shootings in United States history, including Las Vegas and Sutherland Springs, the shooter had an existing record of committing violence against women, threatening violence against women, or harassing or disparaging women. In addition, when an abusive partner is permitted to access firearms, the risk that the other partner will be killed increases fivefold. In 2016, firearms were used in 35 domestic homicides in New York.

In addition to continued progressive improvements to New York’s gun legislation, Governor Cuomo led the creation of the “States for Gun Safety” coalition in February of this year to combat the gun violence epidemic in the face of continued federal inaction. Together with New Jersey, Connecticut, and Rhode Island, New York State entered into an agreement to trace and intercept illegal guns, better share information on individuals prohibited from buying or owning firearms, and create the first-in-the-nation regional gun violence research consortium. Massachusetts, Delaware, and Puerto Rico have also joined the coalition, which now represents over 35 million Americans.