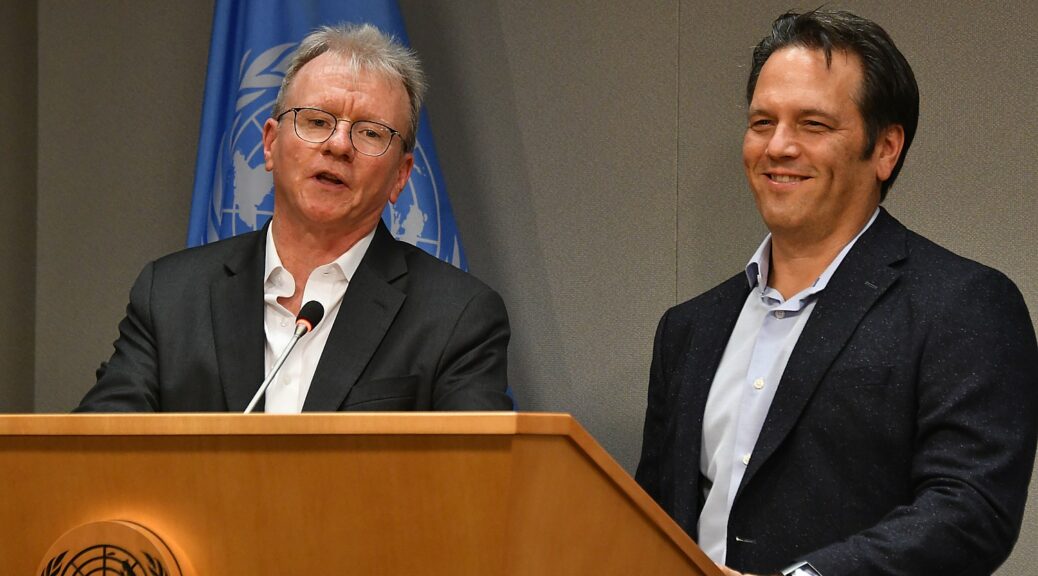 Some of the biggest names in the video games industry, with a combined audience of 970 million players, have formally committed to harness the power of their platforms to take action in response to the climate crisis. Combined, these commitments from 21 companies will result in a 30 million ton reduction of CO2 emissions by 2030, will see millions of trees planted, new “green nudges” in game design and improvements to energy management, packaging, and device recycling.

These voluntary commitments were announced at UN Headquarters on the side-lines of the UN Secretary-General’s Climate Action Summit. Under the banner of the Playing for the Planet Alliance, CEOs from 14 platforms and games makers, including Sony Interactive Entertainment, Microsoft, Google Stadia, Rovio, Supercell, Sybo, Ubisoft and WildWorks, were present to showcase their commitments. The Alliance intends to support companies in sharing learning and monitoring progress on the environmental agenda.

“The video games industry has the ability to engage, inspire and captivate the imaginations of billions of people across the world. This makes them a hugely important partner in addressing the climate emergency,” said Inger Andersen, Executive Director, UN Environment Programme (UNEP). “We are encouraged by the commitment of these gaming companies, which shows recognition that we all must play our role in the global effort to lower carbon emissions and effect real change towards sustainability.”

These commitments were facilitated by UNEP with the support of Playmob and following the GRID-Arendal study Playing For The Planet, which outlines how the video games industry, which reaches 2.6 billion people globally, can support action on the environmental agenda.

“Today at the UN Climate Summit, I am honored and feel privileged to join leaders in the gaming industry to make commitments to contribute to the efforts of the UN,” said Jim Ryan, President and CEO of Sony Interactive Entertainment. “At PlayStation, we believe games have the power to ignite social change through educating people, evoking emotions, and inspiring hope. We could not be prouder to be part of the Playing for the Planet Alliance and we look forward to seeing what the industry can achieve together.”

“Climate change is impacting each industry and every sector, and we believe technology can play a critical role in enabling and empowering the response to this challenge,” said Phil Spencer, executive vice president of gaming at Microsoft. “Initiatives like our Minecraft Build a Better World Campaign and CarbonNeutral Xbox pilot provide a great opportunity to tap into Microsoft’s technology sustainability and gaming community to make a difference in this key area of our business.”

Sony Interactive Entertainment will unveil new progress and plans to utilize energy efficient technology (on-track to avoid 29 million tons of CO2 emissions by 2030), to introduce low power suspend mode for next generation PlayStation, to assess and report their carbon footprint and to educate and inspire the gaming community to take action on climate change.

Microsoft will announce the expansion of its existing operational commitment to carbon neutrality, established in 2012, into its devices and gaming work. It will set a new target to reduce its supply chain emissions by 30 per cent by 2030 – including end-of-life for devices – and to certify 825,000 Xbox consoles as carbon neutral in a pilot program. In addition, Microsoft will engage gamers in sustainability efforts in real life through the Minecraft its ‘Build a Better World’ initiative, which has seen players take more than 20 million in-game actions.

Google Stadia, which is set to launch later in the year, will produce a new Sustainable Game Development Guide as well as funding research into how “green nudges” can be effectively incorporated into game play.

Supercell (Clash of Clans) will offset the entire footprint of their community, Rovio (Angry Birds) has offset the carbon impact from their players charging their devices, and Sybo (Subway Surfer) and Space Ape (Fastlane) will offset 200 per cent of their studio and their gamers mobile energy use. Guidance documents will assist other companies to take similar actions.

Wild Works (Animal Jam) will integrate restoration elements in games and, like Green Man Gaming, they will focus on restoring some of the world’s forests with major tree-planting initiatives

Ubisoft will develop in-game green themes and will source materials from eco-friendly factories and Sports Interactive will eliminate 20 tonnes of packaging by switching from plastic to a recycled alternative for all future Football Manager releases.

Creative Mobile’s ZooCraft will evolve into a conservation-focused game with Reliance Games (Little Singham) generating awareness in the fastest growing mobile gaming market by creating awareness with kids to make them ambassadors for climate change with in-game events and initiatives across India. The biggest independent gaming platform in China, iDreamSky has committed to putting green nudges into its games.

Finally, Twitch have committed to utilizing their platform to spread this message to the global gaming community with Niantic Inc (Pokemon Go) committing to engage their community to act around sustainability issues.

“Through awareness-raising campaigns connected to our Angry Birds games and movies over the years, we know our fans are just as angry as us about climate change,” said Kati Levoranta, Rovio Entertainment CEO. “Considering the enormity of the environmental challenges that face us in years to come, we as an industry must stand with our players and be evangelists for action.”

Too often, there can be a trade-off between games that are designed to be educational but without reaching the masses. To address this, many of the companies will host design-jams with their creatives to consider how they can mindfully incentivize better environmental outcomes within the games, without limiting the fun and enjoyment for players.

Speaking in support of this initiative, Mathias Gredal Norvig, CEO of Sybo, the organization behind Subway Surfer, said: “Video gaming might seem like an unlikely ally in this battle, but this Alliance is a critical platform where all of us can play our part to decarbonize our impact and bring the issues into gameplay. I am a strong believer in sparking curiosity and conversations wherever people are, and with 2 billion people playing games, this platform has a reach that’s second to none.”

Amit Khanduja, CEO of Reliance Games, said: “The Mobile Games industry has to take the lead in the emerging markets to raise awareness among the next billion gamers coming online to lead the way for climate change. We are honoured to be part of this strong UN initiative for a better tomorrow.”

Youth Climate Activist Greta Thunberg to UN Climate Summit: ‘If You Choose to Fail Us, I Say We Will Never Forgive You’