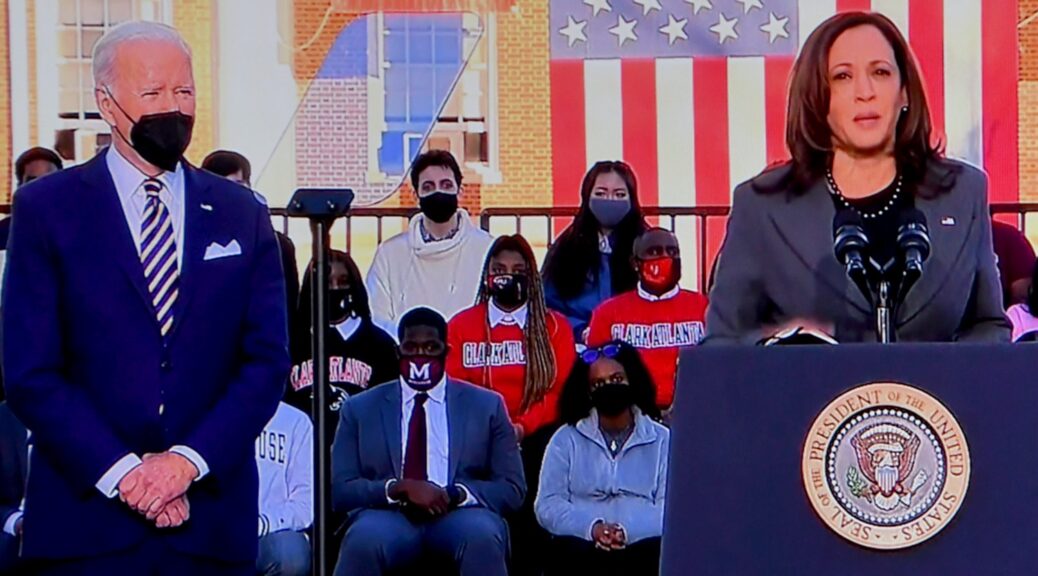 Vice President Kamala Harris and President Joe Biden came out forcefully to demand protection of voting rights and election integrity in speeches in Atlanta and called for removing the filibuster, weaponized as an obstacle to Senate action. Republicans in the Senate and House immediately twisted and attacked the Democrats’ desire to assure free and equal access to the ballot and fair counting as an attempt to hijack elections, rather than preserve the foundational element of democracy, dismissing what Republican-dominated legislatures are doing around the country to – by simple majority vote – enact voter suppression, gerrymandered maps and rules that allow them to subvert elections by overturning the will of the majority.

“The assault on our freedom to vote will be felt by every American, in every community, in every political party….The American people have waited long enough.  The Senate must act,” Harris declared. “We will fight to secure our most fundamental freedom: the freedom to vote.“ Here is a highlighted transcript of Vice President Harris’ remarks:

And that is why we have come to Atlanta today — to the cradle of the Civil Rights Movement; to the district that was represented by the great Congressman John Lewis — (applause) — on the eve of the birthday of Reverend Dr. Martin Luther King, Jr.  (Applause.)

More than 55 years ago, men, women, and children marched from Selma to Montgomery to demand the ballot.  And when they arrived at the State Capitol in Alabama, Dr. King decried what he called “normalcy” — the normalcy, the complacency that was denying people the freedom to vote.

The only normalcy anyone should accept, Dr. King said, is the “normalcy of justice.”  And his words resonate today.

Anti-voter laws are not new in our nation, but we must not be deceived into thinking they are normal.

We must not be deceived into thinking a law that makes it more difficult for students to vote is normal.

We must not be deceived into thinking a law that makes it illegal to help a voter with a disability vote by mail is normal.  (Applause.)

There is nothing normal about a law that makes it illegal to pass out water or food to people standing in long voting lines.  (Applause.)

And I have met with voters in Georgia.  I have heard your outrage about the anti-voter law here and how many voters will likely be kept from voting.

And Georgia is not alone.  Across our nation, anti-voter laws could make it more difficult for as many as 55 million Americans to vote.  That is one out of six people in our country.

And the proponents of these laws are not only putting in place obstacles to the ballot box, they are also working to interfere with our elections to get the outcomes they want and to discredit those they don’t.

That is not how a democracy should work.

My fellow Americans: Do not succumb to those who would dismiss this assault on voting rights as an unfounded threat — who would wave this off as a partisan game.

The assault on our freedom to vote will be felt by every American, in every community, in every political party.

And if we stand idly by, our entire nation will pay the price for generations to come.

And these two bills represent the first real opportunity to secure the freedom to vote since the United States Supreme Court gutted the Voting Rights Act nearly a decade ago.

We do not know when we will have this opportunity again.  Senate Republicans have exploited arcane rules to block these bills.

The American people have waited long enough.  The Senate must act.

Let us tell them we acted with the urgency that this moment demands.

And let us tell them we secured the freedom to vote, that we ensured free and fair elections, and we safeguarded our democracy for them and their children. 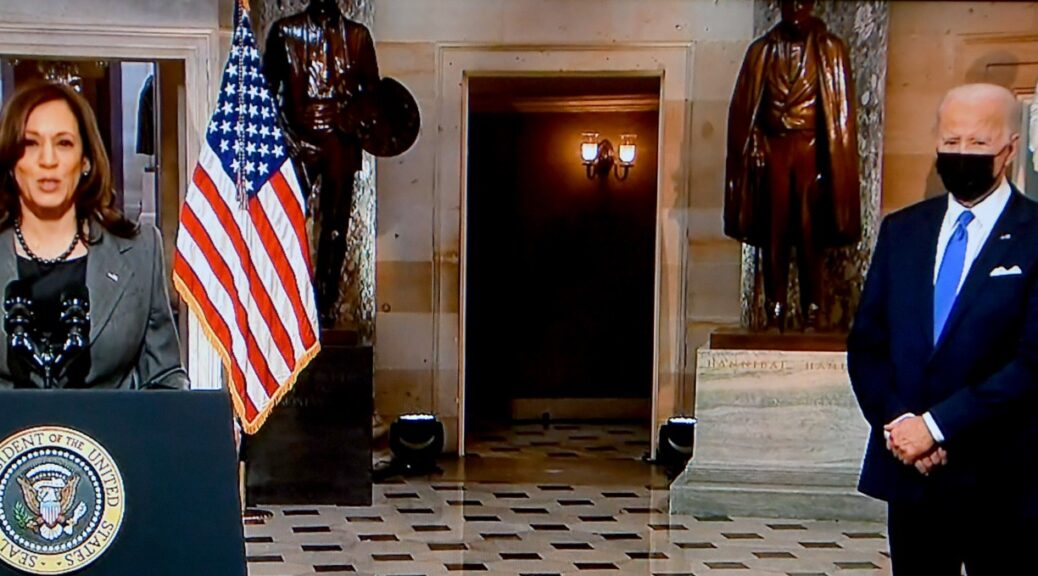 In her remarks on the one-year anniversary of the January 6 insurrection, Vice President Kamala Harris reminded the nation that “the strength of democracy is the Rule of Law,” and that to preserve our fragile, tested democracy requires voting rights in order to maintain free and fair elections. Here is a highlighted transcript of her remarks, delivered in the Capitol Rotunda:

Certain dates echo throughout history, including dates that instantly remind all who have lived through them — where they were and what they were doing when our democracy came under assault.  Dates that occupy not only a place on our calendars, but a place in our collective memory.  December 7th, 1941.  September 11th, 2001.  And January 6th, 2021.

On that day, I was not only Vice President-elect, I was also a United States senator.  And I was here at the Capitol that morning, at a classified hearing with fellow members of the Senate Intelligence Committee.  Hours later, the gates of the Capitol were breached.

I had left.  But my thoughts immediately turned not only to my colleagues, but to my staff, who had been forced to seek refuge in our office, converting filing cabinets into barricades.

What the extremists who roamed these halls targeted was not only the lives of elected leaders.  What they sought to degrade and destroy was not only a building, hallowed as it is.  What they were assaulting were the institutions, the values, the ideals that generations of Americans have marched, picketed, and shed blood to establish and defend.

On January 6th, we all saw what our nation would look like if the forces who seek to dismantle our democracy are successful.  The lawlessness, the violence, the chaos.

What was at stake then, and now, is the right to have our future decided the way the Constitution prescribes it: by we, the people — all the people.

We cannot let our future be decided by those bent on silencing our voices, overturning our votes, and peddling lies and misinformation; by some radical faction that may be newly resurgent but whose roots run old and deep.

When I meet with young people, they often ask about the state of our democracy, about January 6th.  And what I tell them is: January 6th reflects the dual nature of democracy — its fragility and its strength.

And the fragility of democracy is this: that if we are not vigilant, if we do not defend it, democracy simply will not stand; it will falter and fail.

The violent assault that took place here, the very fact of how close we came to an election overturned — that reflects the fragility of democracy.

Yet, the resolve I saw in our elected leaders when I returned to the Senate chamber that night — their resolve not to yield but to certify the election; their loyalty not to party or person but to the Constitution of the United States — that reflects its strength.

And so, of course, does the heroism of the Capitol Police, the D.C. Metropolitan Police Department, the National Guard, and other law enforcement officers who answered the call that day, including those who later succumbed to wounds, both visible and invisible.

Our thoughts are with all of the families who have lost a loved one.

You know, I wonder, how will January 6th come to be remembered in the years ahead?

Will it be remembered as a moment that accelerated the unraveling of the oldest, greatest democracy in the world or a moment when we decided to secure and strengthen our democracy for generations to come?

The American spirit is being tested.

The answer to whether we will meet that test resides where it always has resided in our country — with you, the people.

And the work ahead will not be easy.  Here, in this very building, a decision will be made about whether we uphold the right to vote and ensure free and fair election.

Let’s be clear: We must pass the voting rights bills that are now before the Senate, and the American people must also do something more.

We cannot sit on the sidelines.  We must unite in defense of our democracy in order to form a more perfect union, establish justice, ensure domestic tranquility, provide for the common defense, promote the general welfare, and secure the blessings of liberty to ourselves and to our prosperity and posterity.

That is the preamble of the Constitution that President Biden and I swore an oath to uphold and defend.  And that is the enduring promise of the United States of America.