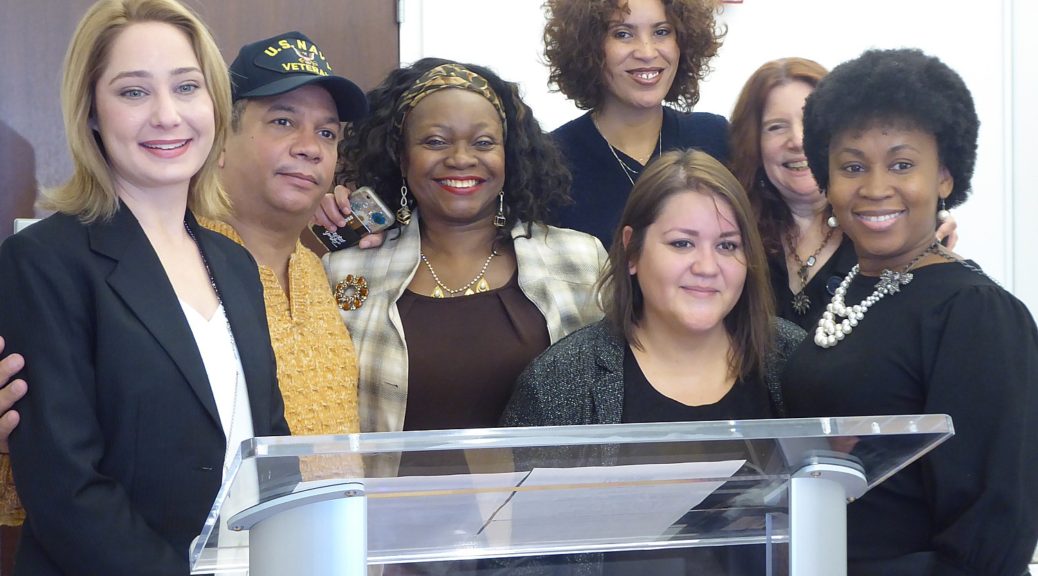 Women’s March Alliance, the official organizer of the March on NYC since 2017, will stage its third annual march on Saturday, January 19. Line up begins at 10 a.m. with the march kicking off at 11 a.m. on 61st Street and Central Park West (main entrance on 72nd and Columbus). The march, which is expected to draw 100,000 participants, will run along Central Park West south around Columbus Circle, east on 59th Street then south on 6th Avenue.

The complete map route is available at https://womensmarchalliance.org/2019-womens-march-on-nyc.

The theme for this year’s Woman’s March, taking place in New York City on Saturday Jan 19, could well be “I am woman. Hear me roar,” especially after the dramatic successes culminating in the 2018 elections that saw a record number of women running for office and elected – women now one-fourth of Congress, and there are four more women governors.

And in New York, the successful takeover of the Senate gives new hope for a progressive agenda, topped with the Women’s Reproductive Health Act.

But the Women’s March Alliance organizers worry that sheer exhaustion and complacency might rightly set in after all that happened to produce the success of  2018, but that there still so much work to be done, not the least is: Now you have heard our roar, act.

“We want to make sure we don’t stop fighting. We are half way there. We can’t stop now. We have to move forward,” said Katherine Siemionko, founder and president of Women’s March Alliance. “The theme for the march is ‘Your Voice Your Power.’ We have seen what happened in 2018  Elections. New York cannot stand back. New York leads nation in progress.” (The actual hashtag for the march is #YourVoiceYourPower)

Indeed, that there is still so much work to be done is reflected in the cavalier attitude Trump and Republicans have to shutting down government, with no clue and no care of the ramifications on women and families that go beyond withholding pay to 800,000 federal workers as well as contractors,from food safety to food stamps, from mortgages to small business loans, from housing vouchers to veterans benefits. They even stood by while the Violence Against Women Act expired.

And then there is the unbelievable cruelty being inflicted on millions of families across the nation who may have an undocumented immigrant among them but American citizen spouse or children, or the four million Dreamers whose lives are in limbo. Think of the desperate migrants as the Trump Administration tries to overturn domestic violence and gang violence as a basis for asylum; the forced separation of families; the families of tens of thousands of migrants and refugees here for decades under Temporary Protected Status who have been told they will be deported. Think of the families ripped apart. That’s a woman’s issue, too.

Now Trump is threatening to declare a national emergency in order to take funds allocated for rebuilding communities devastated by climate disasters in Puerto Rico afflicted by Maria, in California after the wildfires, in Florida and South Carolina after Michael. And then there is the humanitarian crisis created by Trump’s anti-immigrant policy that has led to two children dying while in US custody, and hundreds of children rendered orphans, thousands more traumatized by their condition.

But this is New York State, and thankfully, there is finally full control by Democrats. On January 22, the 46th anniversary of Roe v Wade, the State Legislature is expected to pass the Reproductive Health Act, strengthening abortion access by codifying the principles of Roe v. Wade in state law, after 12 years of trying but failing. But this action cannot be taken for granted. There is still need to push the politicians to act –and not take such landmark for granted..

This is no time to be complacent – the regressive forces are not complacent, they are seizing the opportunity of a hard-religious right majority on the Supreme Court, to push through personhood amendments that essentially give more rights to a fetus than the mother carrying it. Women have actually been prosecuted for miscarrying and such laws could be applied to punish women for behaviors that are deemed harmful to a fetus. Essentially, women would become slaves of the state, not considered entitled to the same right of self-determination as a man. Big Brother doesn’t begin to describe government’s intervention..

If Roberts’ Court rules that the fetus has “personhood” rights under the Constitution,  all abortions would be illegal — even in states like New York that overwhelmingly support a woman’s right to choose.  (See the full series of editorials in the New York Times, www.nytimes.com/interactive/2018/12/28/opinion/abortion-law-pro-life.html).

So this year’s march has its own urgency: to cement and recommit, to make sure that the electeds carry out what could be called a woman’s agenda but encompasses so much because women’s issues are so broad.

But if you still need a motivation, consider this: the 2020 presidential election is already underway, and the way women candidates for office are once again being evaluated according to a different standard (“likeability,” “shrill”).

The danger of complacency needs to be recalled: that’s what happened in 2016, when too many believed that Hillary Clinton becoming the first woman to head a major party ticket meant that America had entered a post-feminist era, just as Obama’s election was supposedly a post-racist era. Okay to stay home out of some manufactured outrage, just because you could; okay to throw a vote away on an independent candidate, because of course the most qualified candidate, who stood for gender rights, civil rights, criminal justice, environmental justice, economic justice, would win. We saw how that went.

The march, which will include opportunities to register to vote (and local elections in 2019 are important), is a call to action to get things done while we have the “honeymoon” of the new electeds and the fear of God in the incumbents – because they think they can do anything they want and ignore the voices of 2018 because the electorate won’t remember in 2020.

It is important, as well, to keep the networks and the alliances intact, for the affirmation and validation that the marchers give to one another. And because 2020 is right around the corner.

Indeed, the greatest threat to the Women’s movement is complacency (and fatigue) after the hard-won victories of 2018.

“We must be fearful that people have become comfortable, because that’s what happened in 2016 – we were the popular vote, we still are the popular vote, we don’t want to get comfortable and let the crazy seem like the status quo & normal,” said Freedom Shannon, a member of the board of WMA which describes itself as “a nonprofit alliance of human rights supporters who seek to close the social, political and economic gender divide.”

“We are changing what it means to be a woman in our society. We have marched to being one in five in Congress, but we need to come out January 19 to honor those who have come before us, to show those in countries that cannot assemble, what democracy looks like, and pave the way for future generations,” Shannon said. “On January 19, we will unify our voices so we amplify enough to be heard by the people in power and soften their hearts so they can act without prejudice.”

The organizers at a press conference introducing the event stressed that WMA is completely separate from Womens March Inc. which organized the Washington March in 2017 and is holding a rally in New York City also on January 19. That organization raised controversy of being anti-Semitic when leaders expressed support for Louis Farrakhan.

Siemionko noted “We are a local grassroots team of volunteers hosting this event for the third year in a row, and we do not have nor have we ever had an association with Women’s March, Inc. or its founders.”

She continued, “Our mission is to include and advance women regardless of faith, sexual identity and preference, race, cultural and religious background or political affiliation.”

Siemionko was firm on insisting that WMA is inclusive, and that like all the other sister marches that took place in 2017 and 2018 in cities across the nation, all grew organically, as local grassroots organizations reflecting their communities.

She stressed how WMA went out of its way to accommodate the Jewish community, including organizing the march so it would start within walking distance of a large segment of the community on the Upper West Side. “We wanted to honor those Jews who want to honor Sabbath without taking public transportation, but can march to support women’s rights.” In addition, Siemionko will be participating in a panel on January 17 at the Stephen Wise Synagogue.

“The confusion happened when Womens March Inc, the official march of DC, decided to break ground here in NYC. Unfortunately that happened at time when irresponsible wording was used to insult different communities.

“One of the reasons we became part of WMA since its inception is that anti-Semitism, racial discrimination, LGBT discrimination had no place here, especially in New York City, the most diverse place in the nation, in the world,” said Debra Dixon Anderson, director of operations of the New York City Hispanic Chamber of Commerce and a WMA board member, “and we appreciate all different walks of life.”

WMA is the only organization that has a permit from New York City for a march on January 19.

Enter at 72nd Street to Central Park West, or enter from Central Park. There will be a 15-minute kickoff at 11 am (not a rally), then the march will get underway at 11:15, go south past Columbus Circle, east on 59, then south to 44 Street. Check the site for details.

There will be a female Indian chief to bless the march, female drum bands, brass bands, acrobats, DJs, and activists.

In conjunction with the event, people will have a chance to see “Eyes of the World,” a giant, collaborative mosaic, 5 ft tall and 18 feet wide, produced by thousands of contributors since the first Women’s March on New York City in 2017. that is on view at the Newburger Gallery in the lobby of SUNY Optometry (33 West 42nd Street), across from Bryant Park, noon to 9 pm.

“’Eyes of the World’ is a tangible and permanent reminder to the United States government that our eyes are constantly watching to ensure all policies embody human rights, advance civil rights, and promote the highest degree of equality,” write Joanne and Bruce Hunter, artists and creators of public art.