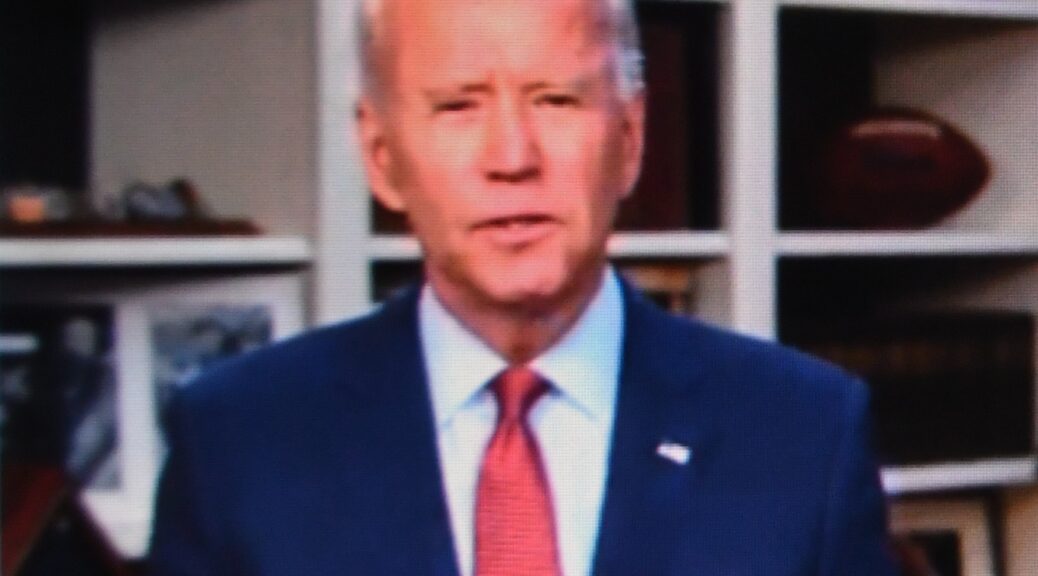 Vice President Joe Biden, the presumptive Democratic candidate for President, in a statement addressing the allegations of sexual assault by a former congressional staffer from 27 years ago, denied the allegations while affirming the woman’s right to be heard and her complaints properly investigated. Biden, who has a distinguished career championing women’s rights, in fact securing passage of the Violence Against Women Act, invited investigation into any evidence of complaint, which he said would be filed in the National Archives. Here is his statement:

April was Sexual Assault Awareness Month. Every year, at this time, we talk about awareness, prevention, and the importance of women feeling they can step forward, say something, and be heard. That belief – that women should be heard – was the underpinning of a law I wrote over 25 years ago. To this day, I am most proud of the Violence Against Women Act. So, each April we are reminded not only of how far we have come in dealing with sexual assault in this country – but how far we still have to go.

When I wrote the bill, few wanted to talk about the issue. It was considered a private matter, a personal matter, a family matter. I didn’t see it that way. To me, freedom from fear, harm, and violence for women was a legal right, a civil right, and a human right. And I knew we had to change not only the law, but the culture.

So, we held hours of hearings and heard from the most incredibly brave women – and we opened the eyes of the Senate and the nation – and passed the law.

In the years that followed, I fought to continually strengthen the law. So, when we took office and President Obama asked me what I wanted, I told him I wanted oversight of the critical appointments in the Office on Violence Against Women at the Department of Justice and I wanted a senior White House Advisor appointing directly to me on the issue. Both of those things happened.

As Vice President, we started the “It’s on Us” campaign on college campuses to send the message loud and clear that dating violence is violence – and against the law.

We had to get men involved. They had to be part of the solution. That’s why I made a point of telling young men this was their problem too – they couldn’t turn a blind eye to what was happening around them – they had a responsibility to speak out. Silence is complicity.

In the 26 years since the law passed, the culture and perceptions have changed but we’re not done yet.

It’s on us, and it’s on me as someone who wants to lead this country. I recognize my responsibility to be a voice, an advocate, and a leader for the change in culture that has begun but is nowhere near finished. So I want to address allegations by a former staffer that I engaged in misconduct 27 years ago.

They aren’t true. This never happened.

While the details of these allegations of sexual harassment and sexual assault are complicated, two things are not complicated. One is that women deserve to be treated with dignity and respect, and when they step forward they should be heard, not silenced. The second is that their stories should be subject to appropriate inquiry and scrutiny.

Responsible news organizations should examine and evaluate the full and growing record of inconsistencies in her story, which has changed repeatedly in both small and big ways.

But this much bears emphasizing.

She has said she raised some of these issues with her supervisor and senior staffers from my office at the time. They – both men and a woman – have said, unequivocally, that she never came to them and complained or raised issues. News organizations that have talked with literally dozens of former staffers have not found one – not one – who corroborated her allegations in any way. Indeed, many of them spoke to the culture of an office that would not have tolerated harassment in any way – as indeed I would not have.

There is a clear, critical part of this story that can be verified. The former staffer has said she filed a complaint back in 1993. But she does not have a record of this alleged complaint. The papers from my Senate years that I donated to the University of Delaware do not contain personnel files. It is the practice of Senators to establish a library of personal papers that document their public record: speeches, policy proposals, positions taken, and the writing of bills.

There is only one place a complaint of this kind could be – the National Archives. The National Archives is where the records are kept at what was then called the Office of Fair Employment Practices. I am requesting that the Secretary of the Senate ask the Archives to identify any record of the complaint she alleges she filed and make available to the press any such document. If there was ever any such complaint, the record will be there.

As a Presidential candidate, I’m accountable to the American people. We have lived long enough with a President who doesn’t think he is accountable to anyone, and takes responsibility for nothing. That’s not me. I believe being accountable means having the difficult conversations, even when they are uncomfortable. People need to hear the truth.

I have spent my career learning from women the ways in which we as individuals and as policy makers need to step up to make their hard jobs easier, with equal pay, equal opportunity, and workplaces and homes free from violence and harassment. I know how critical women’s health issues and basic women’s rights are. That has been a constant through my career, and as President, that work will continue. And I will continue to learn from women, to listen to women, to support women, and yes, to make sure women’s voices are heard.

We have a lot of work to do. From confronting online harassment, abuse, and stalking, to ending the rape kit backlog, to addressing the deadly combination of guns and domestic violence.

We need to protect and empower the most marginalized communities, including immigrant and indigenous women, trans women, and women of color.

We need to make putting an end to gender-based violence in both the United States and around the world a top priority.

I started my work over 25 years ago with the passage of the Violence Against Women Act. As president, I’m committed to finishing the job.