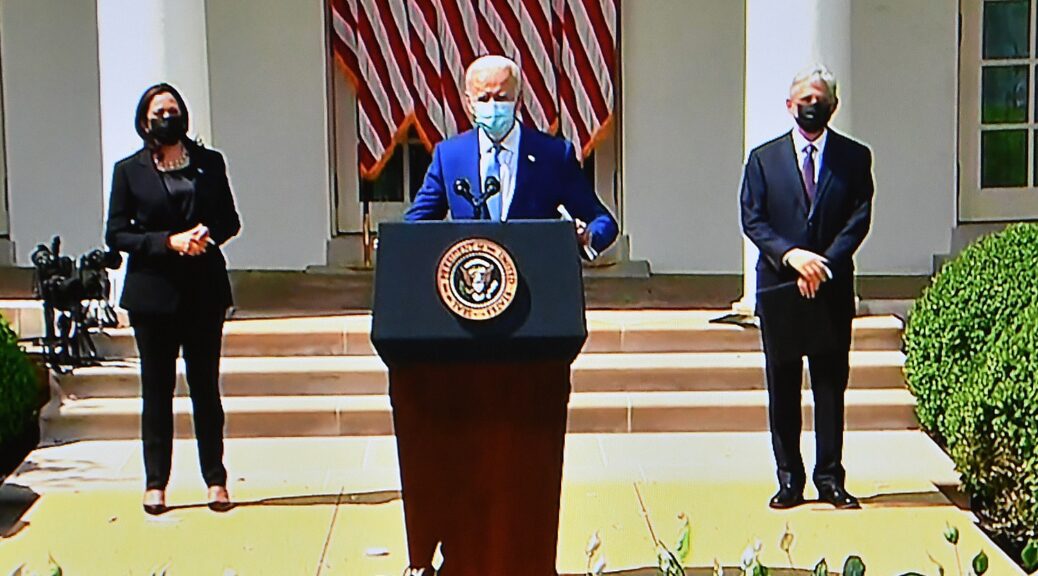 The recent high-profile mass shootings in Boulder – taking the lives of 10 individuals – and Atlanta – taking the lives of eight individuals, including six Asian American women – underscored the relentlessness of this epidemic. Gun violence takes lives and leaves a lasting legacy of trauma in communities every single day in this country, even when it is not on the nightly news. In fact, cities across the country are in the midst of a historic spike in homicides, violence that disproportionately impacts Black and brown Americans. The President is committed to taking action to reduce all forms of gun violence – community violence, mass shootings, domestic violence, and suicide by firearm and detailed a whole-of-government response.

Meanwhile, President Biden reiterated his call for Congress to pass legislation to reduce gun violence. Last month, a bipartisan coalition in the House passed two bills to close loopholes in the gun background check system. Congress should close those loopholes and go further, including by closing “boyfriend” and stalking loopholes that currently allow people found by the courts to be abusers to possess firearms, banning assault weapons and high capacity magazines, repealing gun manufacturers’ immunity from liability, and investing in evidence-based community violence interventions. Congress should also pass an appropriate national “red flag” law, as well as legislation incentivizing states to pass “red flag” laws of their own.

The Justice Department, within 60 days, will issue a proposed rule to make clear when a device marketed as a stabilizing brace effectively turns a pistol into a short-barreled rifle subject to the requirements of the National Firearms Act. The alleged shooter in the Boulder tragedy last month appears to have used a pistol with an arm brace, which can make a firearm more stable and accurate while still being concealable.

The Justice Department, within 60 days, will publish model “red flag” legislation for states. Red flag laws allow family members or law enforcement to petition for a court order temporarily barring people in crisis from accessing firearms if they present a danger to themselves or others. The President urges Congress to pass an appropriate national “red flag” law, as well as legislation incentivizing states to pass “red flag” laws of their own. In the interim, the Justice Department’s published model legislation will make it easier for states that want to adopt red flag laws to do so.

The President will nominate David Chipman to serve as Director of the Bureau of Alcohol, Tobacco, and Firearms. ATF is the key agency enforcing our gun laws, and it needs a confirmed director in order to do the job to the best of its ability. But ATF has not had a confirmed director since 2015. Chipman served at ATF for 25 years and now works to advance commonsense gun safety laws.

Cities across the country are experiencing a historic spike in homicides, violence that is greatest in racially segregated, high-poverty neighborhoods. Black men make up 6% of the population but over 50% of gun homicide victims. Black women, Latinos, and Native Americans are also disproportionately impacted. The loss of life has devasting consequences for family members and cascading harms for communities. As just one example, research shows that exposure to firearm violence—including as a victim or witness—makes it twice as likely an adolescent will commit a violent act within two years.

But there is reason to be optimistic. We know that a relatively small number of people are involved in urban gun violence, whether as perpetrators or victims. There are proven community violence intervention (CVI) strategies for reducing gun violence through tools other than incarceration. For example, violence interruption programs deploy trusted messengers work directly with individuals most likely to commit gun violence, intervene in conflicts, and connect people to social and economic services to reduce the likelihood of gun violence as an answer.  Hospital-based violence interventions engage people who have been shot while they are still in the hospital, connecting them to services to decrease the likelihood that they commit gun violence or are victimized in the future. Programs like these have reduced homicides by as much as 60% in areas where they are implemented.

To date, CVI programs have been badly underfunded, even though the economic consequences of gun violence are staggering. One study calculates that gun violence costs America $280 billion annually. For fraction of that cost, we can save lives, create safe and healthy communities, and build an economy that works for all of us.

As part of a package of initial actions to reduce gun violence, the Biden-Harris Administration announces historic investments in community violence intervention to combat the gun violence epidemic.

Medicaid Funding: The U.S. Department of Health and Human Services is organizing a webinar and toolkit to educate states on how they can use Medicaid to reimburse certain community violence intervention programs, like Hospital-Based Violence Interventions
Leveraging Existing Grant Programs: Five agencies are making changes to existing federal funding streams across 26 programs to direct vital support to CVI programs quickly as possible. For example:

Department of Health and Human Services

Department of Housing and Urban Development

DOL will make CVI an allowable grant activity in Program Year 2021 (July 2021-June 2022) for its Young Adult Reentry Partnership grants, $25 million for organizations providing education and employment training to young adults who left high school before graduation or have had justice system involvement. The grants prepare participants who reside in high-poverty and high-crime communities—those disproportionately impacted by gun violence—for stable, quality employment.  The funding opportunity announcement will be posted in early 2022.