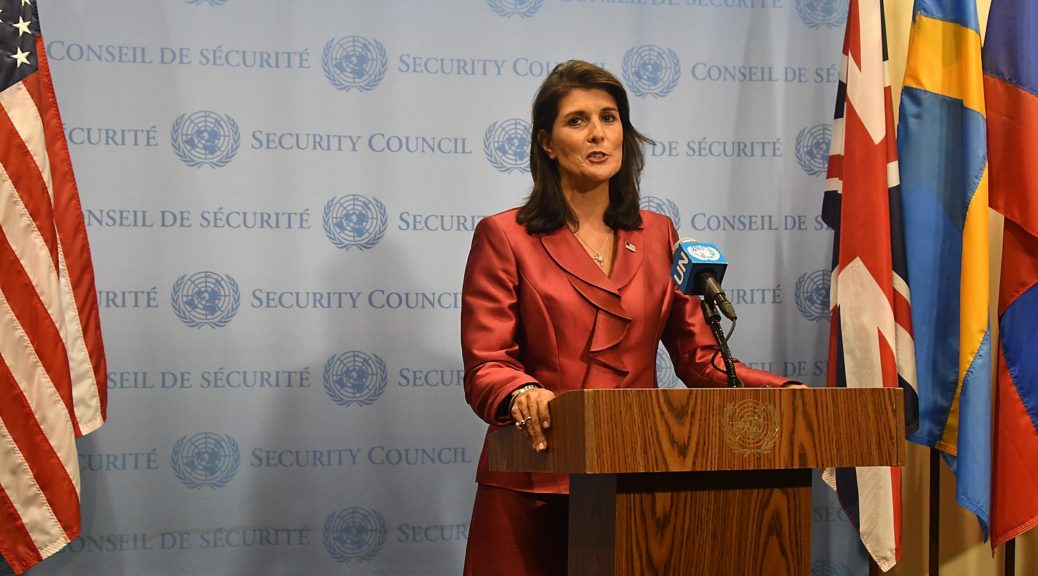 To hear Nikki Haley, the US Ambassador to the United Nations, preview US priorities for the 73rd UN General Assembly High-Level Week which gets underway Monday September 24, the United Nations is merely a stage and the rest of the world’s ministers mere players for American interests, otherwise the US doesn’t want to take part, asserting its “sovereignty.” While the UN Secretary-General António Guterres has made strengthening “multilateralism” a key objective this year (which includes addressing climate change, refugees, nuclear nonproliferation, and financing and mobilizing private investment for sustainable developing economies “without which, sustainable goals are not feasible”), in the US definition, “multilateralism” is getting other countries to do America’s bidding – whether sanctioning North Korea or Iran –  but nothing that “mandates” the United States to do what it doesn’t want to do.

“We’ve said from very beginning almost two years ago when we came in that we were going to try and see what we make out of the United Nations,” Haley said at a press “stakeout” on Thursday, September 20. Issues like the Global Migration Compact, the Paris Climate Accord, “all these things that we felt were mandating things on the US, those aren’t things we want to be involved in…We really value sovereignty. We think every country should. That’s the conversation we want.

“We’re not saying that multilateralism can’t work but sovereignty is above all of that.”

Add to that list the Treaty on the Prohibition of Nuclear Weapons, adopted at the United Nations on July 7, 2017, with 122 states voting in favor (but with none of the nine nuclear powers, including the United States, as signatories) and opened for signature by the Secretary-General of the United Nations exactly a year ago. The nuclear weapons prohibition would become international law once 50 nations ratify the treaty. (Commemoration and promotion of the International Day for the Total Elimination of Nuclear Weapons will take place on Wednesday, September 26, the same day as Trump chairs the Security Council meeting.)

The focus next week, when some 84 heads of state will be in New York, she said, “will be very much on the United States, what our role is in the world, the relationships we want to continue to build and what we can do about that. I think the goal we all have in this administration: how to make the American people proud and what actions we can show that make us proud.” (Sounds like a campaign rally for the midterms, more than taking advantage of face-to-face meetings with the heads of state to address issues of war and peace, life and death.)

“The US presidency has been one that has been full of substance, full of issues,” she said. “We are very proud of what we have done. We raised alarm bells on Venezuela, Nicaragua, how the international community must pay more attention. We held the first-ever discussion in front of the Security Council on corruption and how corruption relates to conflict. [We focused on] accountability – a good next step forward on what we’re trying to do on peacekeeping.

“We held multiple meetings on applying pressure on the crisis we hope doesn’t happen in Idlib and the humanitarian situation that can happen. And we are meeting to intensify the need for enforcement of sanctions on North Korea – reminding Security Council members we are all responsible making sure those are enforced properly.”

Last year, Trump’s big initiative in the United Nations General Assembly was about “reform” – as in getting other nations to pay what he considers their fair share, as he did at NATO. This year, the US big initiative is “a global call to action on the global drug problem. We already have 124 countries signed up and the number is growing. It shows that the world drug problem affects so many countries. The focus is on reducing use of illicit drugs, on cutting supply off, expanding treatment, and more than that, international cooperation… I look forward to more signatories.” Apparently, the US is okay with “multilaternalism” when it comes to curbing the drug problem.

There was no mention of the United States withdrawing from the Human Rights Council (ostensibly over perceived bias over Israel but likely also in protest over a report that pointed to 40% of Americans living in poverty, and perhaps to avoid condemnation over its inhumane, even criminal treatment of separating children as young as infants from their parents at the southern border), or its defiance of the International Criminal Court (to which the US has never joined). Instead of mobilizing private investment for sustainable development, the United States is focused on scoring foreign policy successes through tightening screws with sanctions and slashing foreign aid.

Haley said that Donald Trump’s speech to the General Assembly on Tuesday, will focus on “the foreign policy successes the US has had over the past year – protecting US sovereignty – and continue to build relationships with those that share those values.”

The America First policy – really a way of reducing issues to dollars and cents – extends to foreign aid: Haley said the United States’ “generosity” will be confined to those who do what the US wants.

“We will lay down a marker that while the US is generous, we are generous to those who share our values, who want to work with us, and not those who want to stop the US or say ‘death to America’.”

That has already been made clear in the US action to shut down aid to Palestinians– nearly $200 million – prompting members of the Security Council to raise alarms over a looming humanitarian crisis there. The action coincided with the administration shutting the Palestine Liberation Office in Washington DC.

Secretary of State Mike Pompeo will take over the chair to lead a Security Council meeting on North Korea.

“The importance is the fact that every single foreign minister will be attending this Security Council meeting. It is a conversation we think needs to be had, chance for us to look at what we’ve achieved, in progress in North Korea – progress – chance to look at commitment to peace, but also to have conversation that if we don’t enforce sanctions, all this can go away.”

The US will also be focusing international attention on Iran – both from the point of nonproliferation, and as a destabilizing force in the Middle East – as Haley did during a Security Council meeting that was 99% devoted to bashing Israel over settlements and “disproportionate” reaction to Palestinian protests and rocket attacks on Israel, and its plans to demolish a Bedouin village. She, instead, devoted her comments to Iran, and not on salvaging the nuclear agreement, but in trying to amass international support for renewed sanctions.

“Iran continues to be a problem – every dangerous spot, Iran seems to have their fingerprints in it. … their proxies, what they doing to destabilize the Middle East.” But she was vague in terms of whether Trump would agree to meet with Iran President Hassan Rouhani, who reportedly requested a meeting.

“Certainly if Rouhani requested a meeting, that would be for the president to decide.”

She said that Trump has scheduled bilats with South Korea, Egypt, France, Israel, Japan, and the United Kingdom but “others could come up.” She held out the possibility he might agree to meet with Turkey’s Prime Minister Recep Tayyip Erdogan.

“If Erdogan requests a meeting… next week not set in stone. Certainly a head of state could request a meeting and the president would have prerogative” to accept.

The plight of the Myanmar Rohingya is also of concern, she said. “That is a hot topic now. We have to figure out how we going to bring Rohingyans back to Burma in a way it’s safe. I have expressed my view that I don’t think the government has done enough, I don’t think the military has accepted responsibility, Myanmar leader] Aung San Suu Kyi basically acknowledged the fact the reporters were right to be detained and imprisoned, is a real problem. What they’re saying, we’re not understanding and what we’re saying they are not hearing..and at some point the international community ahs to speak with one voice. It’s not okay with them just being in Bangladesh.”

“This is week we all wait for, where we can really put American interests in the spotlight, make it a really prominent thing –with all the administration coming in, they will come in and do their thing. All try to get some good peace and security.”

Interestingly, there was no mention of taking up the issue of one nation’s (Russia) interference in the elections of another (United States), which is a direct attack on sovereignty.

Haley’s remarks, which preceded a Security council meeting devoted to the Middle East, were followed by  representatives of France, Netherlands, Poland, Sweden, and the United Kingdom (EU member countries with a seat on the Council); Belgium and Germany (incoming Council members in 2019) and Italy (a Council member until last year) who issued a joint statement urging Israeli authorities to reconsider its decision to demolish Khan al-Ahmar, a Palestinian village in the West Bank, which, they said not only created a humanitarian crisis but exacerbated the conflict and further eroded the possibility of a two-state solution.

They were followed by Arab State representatives, including the representative from Palestine, who expressed gratitude to the Europeans, but said that the proposed resolution censuring Israel would likely be blocked by the United States.

In contrast to Haley’s declaration of “sovereignty”, Secretary-General António Guterres, in his press conference earlier that day, said, “I will use my meetings and other opportunities next week to press for renewed commitment to a rules-based global order and to the United Nations.  The United Nations is the world’s indispensable forum for international cooperation.  The presence of 84 Heads of State and 44 Heads of Government is eloquent proof of the confidence of the international community in the United Nations.”

Asked whether the Secretary General considers Trump “a threat to multilateralism,” he replied, “First, I don’t like to personalize things.  I think we are facing a situation in which, in different areas and for different reasons, the trust of people in their political establishments, the trust of states among each other, the trust of many people in international organizations has been eroded and that multilateralism has been in the fire.  And so, this is a concern, and that is the reason I said today and I will say it again in the General Assembly, that it’s essential to preserve multilateralism.”

The question that wasn’t asked of Ambassador Haley or Secretary General António Guterres was this: if the US were not (temporarily at least) the largest economy in the world and the UN’s biggest donor (temporarily at least), would the various UN councils and committees prosecute or seek sanctions for: unleashing climate catastrophes by reversing course of spewing heat-trapping gas emissions at five times the proportion of population (the US has 5% of the world’s population but accounts for 25% of carbon emissions)? For unleashing economy-crippling tariffs on countries in defiance of existing treaties in the absence of a true “national security” issue, while bestowing $12 billion in subsidies to farmers, in violation of World Trade Organization rules? For violating the Global Compact on Migration by shutting down virtually all access to refugees and asylum seekers? For violating human rights of asylum seekers fleeing violence in Central America by taking away children as young as infants and incarcerating parents and children for an indeterminate time without hearing, and deporting parents leaving children orphans in custody in the US?