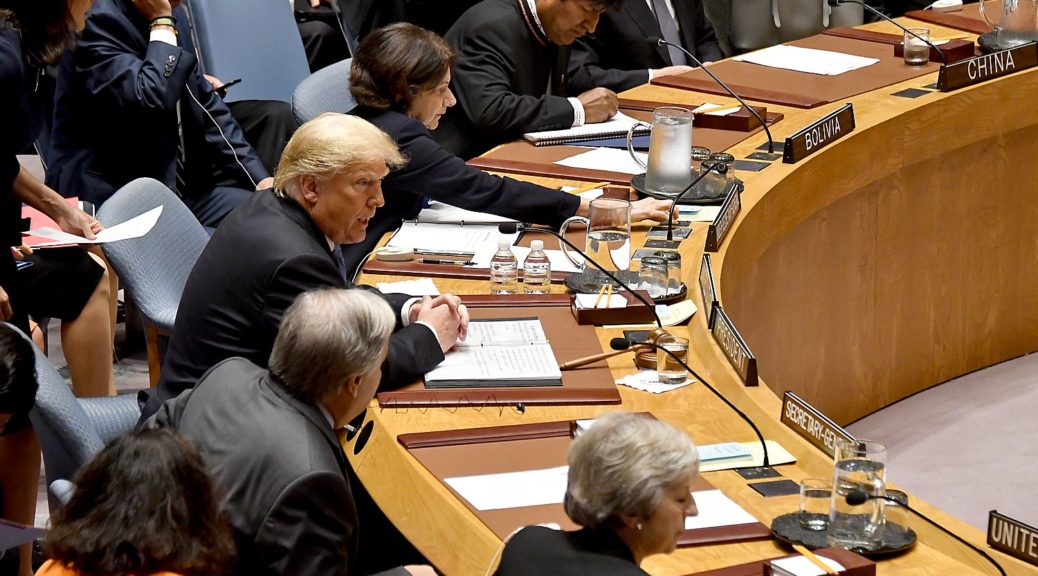 During a Security Council meeting on counter-proliferation of weapons of mass destruction, Donald Trump, chairing the meeting, cited chemical weapons being used in Syria, aided by Russia and Iran, but proceeded only to chastise Iran, and used Iran’s support of terrorism in the region to justify pulling out of the Joint Comprehensive Plan of Action and reimposing economic sanctions on Iran.

“The regime is the world’s leading sponsor of terror and fuels conflict across the region and far beyond.  A regime with this track record must never be allowed to possess a nuclear weapon.

“For this reason, I announced earlier this year that the United States would withdraw from the Iran nuclear deal.

“This horrible, one-sided deal allowed Iran to continue its path towards a bomb and gave the regime a cash lifeline when they needed it the most.  They were in big, big trouble.  They needed cash.  We gave it to them.”

“After that, the United States will pursue additional sanctions, tougher than ever before, to counter the entire range of Iran’s malign conduct.  Any individual or entity who fails to comply with these sanctions will face severe consequences.

“I ask all members of the Security Council to work with the United States to ensure the Iranian regime changes its behavior and never acquires a nuclear bomb.”

In his remarks to the Security Council, Trump went on to thank Iran, Russia, and Syria “for — at my very strong urging and request — substantially slowing down their attack on Idlib Province and the 3 million people who live there in order to get 35,000 targeted terrorists.  Get the terrorists, but I hope the restraint continues.  The world is watching.

“Thank you also to Turkey for helping to negotiate restraint.  Anything the USA can do to help resolve this problem in order to save perhaps even hundreds of thousands of lives, maybe more, we are willing and able.  We are available to help.”

Without missing a beat, Trump then accused China (not Russia) of interfering in the upcoming US midterm elections – by retaliating against US-imposed tariffs with tariffs on products impacting Trump’s voter base including farmers.

“China has been attempting to interfere in our upcoming 2018 election coming up in November against my administration.  They do not want me, or us, to win because I am the first President ever to challenge China on trade.  And we are winning on trade.  We are winning at every level.  We don’t want them to meddle or interfere in our upcoming election.”

Meanwhile, he overstated the progress being made with denuclearizing North Korea.

“As I also mentioned yesterday, we have seen the results of historic efforts to open new pathways to peace on the North Korean Peninsula — on the Korean Peninsula.  And that’s something we are extremely proud of.

“In June, I held a historic summit with Chairman Kim Jong Un in Singapore, where he reaffirmed his commitment to complete denuclearization.  Last week, Chairman Kim reiterated that commitment to President Moon at their third summit, and to me in a very strong letter form.

“I think we will make a deal.  But unfortunately, to ensure this progress continues, we must enforce existing U.N. Security Council resolutions until denuclearization occurs.”

But he expressed concern that “some nations” (without naming Russia) are already violating these U.N. sanctions.  This includes illegal ship-to-ship transfers, which must end immediately.  The safety of the Korean Peninsula, the region, and the world, depends on full compliance with U.N. Security Council resolutions.  Very, very important.

“But most importantly, I believe that Chairman Kim Jong Un, a man I have gotten to know and like, wants peace and prosperity for North Korea.  Many things are happening behind the scenes — away from the media, which nobody knows — but they are happening nevertheless and they are happening in a very positive way.  So I think you will have some very good news coming from North Korea in the coming months and years.

Trump finished with flourishes of glory: “Each of us follows in the footsteps of countless world leaders, diplomats, and public servants who came here to the United Nations with the same noble goal: to build a future worthy of the patriots — true, true patriots — who sacrificed their lives for our nation and for our future.

“To be successful, we need a commitment of every nation represented in this chamber.  Acting together, we can replace the horrors of war with the blessings of safety and the beautiful promise of peace.”

But speakers afterward countered Trump that the way to foster nonproliferation was to save the Iran Nuclear Agreement and build upon it.

French President Emmanuel Macron said there needed to be a long-term strategy to manage the Iran issue and that it could not be done with just sanctions and containment. During a press briefing, Macron said that crippling Iran’s economy would be counterproductive and he would look to mitigate the impact of US sanctions.

And in his General Assembly address, Iran President Hassan Rouhani declared the current US administration “seems determined to render all international institutions ineffectual.”

“What Iran says is clear: no war, no sanctions, no threats, no bullying; just acting according to the law and the fulfillment of obligations,” Rouhani said.

Rouhani said Iran was pleased other countries did not “acquiesce” to the US demands to break the deal.

Unilateral sanctions “constitute a form of economic terrorism and a breach of the right for development,” Rouhani declared.