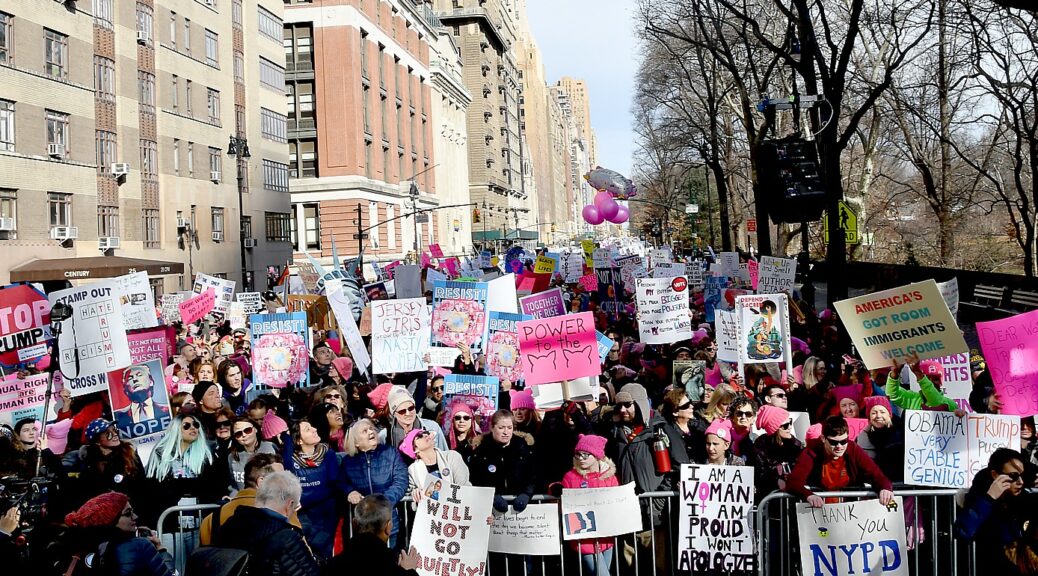 Though it is unlikely that women will re-create the 750,000 who marched on Washington with millions more around the world who turned out in 2017 in the largest single day of protest in history, vastly outnumbering those who came out the day before on the National Mall to watch Trump swear to uphold the Constitution and protect the nation against enemies foreign and domestic,  it is crucial that people turn out for the women’s marches in Washington, DC (Meet at Freedom Plaza, 1455 Pennsylvania Ave. at 10 am, womensmarch.com), New York City (at Central Park West & 72nd Street, 11 am, womensmarchalliance.org) and many other cities in 2020, taking place on Saturday, January 18.

The disappointing reality after that first spectacular Women’s March is how little it accomplished. Lawmakers could care less, based on the policies they enacted, including moving so close to repealing Obamacare except for Senator McCain’s last-second vote, and tax policy that discriminated against women’s health, and shifted $1 trillion in resources from infrastructure and services for everyday Americans to the richest 1% and corporations.  They could care less for the hundreds of thousands who pleaded for sensible gun laws, or for climate action and environmental protection.

There isn’t even the same buzz as in the 2018 march in Washington and around the country (200,000 attended in New York City, alone) , so much more significant because the protest was less about “converting” lawmakers than  mobilizing voter registration, inspiring women to run for elected office, and driving turnout in the November mid-terms.  And they did in historic numbers, putting Democrats back in control of the House which put the brakes to the extent possible on the worst impulses of Trump and the Republicans. “I can do whatever I want as president,” Trump declared at a Turning Point event with young Republicans. (After the House Republican majority’s first success in repealing Obamacare in 2017, Trump said, ‘I’m president. Can you believe it?”)

During 2019, which opened with Trump declaring a “national emergency” to justify shutting down the federal government in order to extort billions to build his wall, migrants continued to be separated and die in custody, thousands were sent to horrific and dangerous conditions in Mexico; gun violence reached new heights; climate disasters have exploded around the globe; and reproductive freedom has been further constricted.

600,000 women lost birth control coverage last year because of the Trump Administration’s attacks on your healthcare; funding for women’s health clinics has been eliminated and artificial barriers to their operation have forced many to close. The Hyde Amendment which bans the use of federal funds to pay for abortions, serves as a de facto ban for a quarter of low-income women.

Even more is at stake in 2020, when Trump and Trumpism is on the ballot. Over this first term, he has been increasingly emboldened and unbridled, to the point where he believes he can unleash a war while schmoozing on the golf course.

So far, the organizers of this Saturday’s Women’s March on Washington, took out a permit for 10,000.

The women’s movement, inexplicably and yet probably not, has gotten wound up, bogged down and even subverted with other issues – racism, anti-Semitism. Leaders are bending over backwards to show how progressive, how inclusive they are, and moving away from the key issues that women are fighting for.

Women’s issues wind up being about all these other issues because all of them affect women’s ability to have equal opportunity, earn what they deserve in order to provide for their families: war and peace, climate change, living wage, public education, health care, affordable pharmaceuticals, clean air and water, voting rights, gun safety, DACA and immigration reform.

But at the heart of all of them is women’s reproductive rights, under threat as never before by a radical right-wingers in Congress and on the courts determined to disregard law and precedent and overturn Roe v Wade (along with Obamacare) with a Supreme Court that has been shifted radically right because of the illegitimate appointments secured by Trump and Senate Majority Mitch McConnell (along with hundreds of judges throughout the federal court system that are long-lasting bombs to womens rights and civil rights.

The Roe v Wade decision in 1973 ruled that the Constitution protects a pregnant woman’s liberty to choose to have an abortion without excessive government restriction – in other words, it was built upon some extrapolation of privacy and property rights, rather than equal protection.

Overturning Roe v Wade would mean that women, unlike men, are not entitled to the same right to self-determination, to make their own judgments and choices for their health, their body, their family or their lives. And like all those other cases that Ginsburg argued as the leading gender rights lawyer for the ACLU before becoming Supreme Court Justice, it would re-establish the systemic barriers to women (not men) to fulfill all their aspirations and abilities. It is as Senator Elizabeth Warren, Democratic candidate for president, said, when women are forced out of the career track, they never get back to where they were if they return at all. This I s the result of unaffordable, inaccessible quality child care and the lack of universal pre-K.

It would essentially make women a subject of the state, forced to give up professional aspirations to care for a child, or spend inordinate amounts of money and resources on child care, put women into poverty because all of these social services are also being tied to work while doing nothing to make childcare affordable, taking away food stamps and school lunch. It’s not one thing, it’s many different elements.

As Justice Ginsburg said, “The decision whether or not to bear a child is central to a woman’s life, to her well-being and dignity. It is a decision she must make for herself. When the government controls that decision for her, she is being treated as less than a fully adult human responsible for her own choices.”

And the Supreme Court decision would not necessarily mean that the state you live in would determine if you might have access to abortion, which would set up a different category of unequal protection – their ruling could make abortion illegal nationwide by establishing “personhood” rights of a fetus, in which case the fetus would have more rights than its mother.

Women are marching for affordable child care, quality public education, affordable and accessible health care without higher cost for women or for pre-existing conditions (which before Obamacare rendered women of child-bearing age), or lifetime caps on coverage at a time when middle class families are spending 20% of income ($12,000/year) on health insurance, 35 million can’t afford life saving drugs they are prescribed, 30,000 die prematurely because of lack of access to health care, and 500,000 go bankrupt because of medical bills.

Women are marching for environmental justice at a time when the Trump Administration is making it easy for polluters to destroy the air and water producing creating public health issues such as  asthma affecting a child’s ability to succeed in school, and worker productivity. It means climate justice at a time when the Trump Administration is actually prosecuting those who would try to reduce carbon emissions (they are trying to prosecute the four auto manufacturers who said they would comply with California’s emissions standards for anti-trust violations), while families are losing their homes, their workplaces and communities have to spend fortune to rebuild after climate disasters.

Women are marching for gun safety so that parents and children don’t have the constant anxiety and school districts and communities don’t have to spend a fortune on security rather than programs that benefit people.

The march is an affirmation, brings like-minded people together, validates our case, and yes, motivates and provides a platform for people to run for office, as in 2018, and win their office.

The march is not about “them” it is about us.

That is why it is so very important to have a strong turnout for this year’s marches, the fourth year in a row, especially in 2020, the centennial of women winning the right to vote, especially in this election year when the nation faces an existential threat from its own government.  Women must turn out, and continue the momentum of 2018 into the 2020 election.

Virginia could be the 38th state to pass the Equal Rights Amendment, which would make the ERA the 28th amendment to the Constitution, though the opponents argue that the votes by the other 37 states have expired, and we’ll have to go through this entire 60-year process all over again. (Trump’s

The opponents argue there is no reason for an amendment that certifies the equal rights of all people. But based on the policies, laws and lawsuits at the federal and state level, an ERA is more necessary than ever, because as we have seen from the Supreme Court, precedents like Roe v Wade and one-person, one-vote, or equal protection for all are fungible.

This is a crucial year for women to turn out, not allow the momentum of 2018 to be lost, but rev up for the 2020 election.

So whip out those pink pussy hats and march for women’s rights on Saturday, January 18. March as if your ability to determine your own future is at stake.