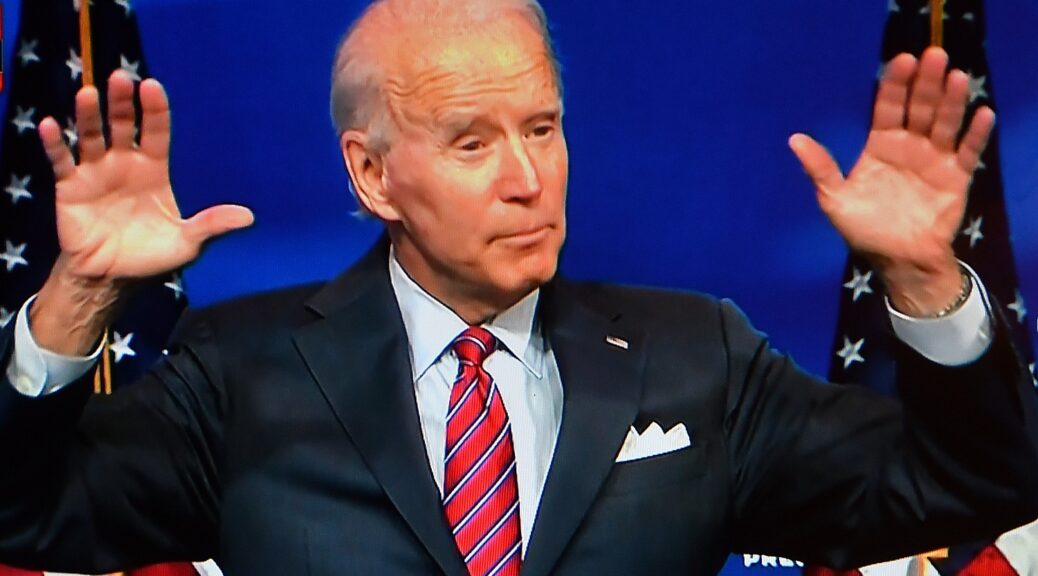 The reactions could not be more stark between the ignorant, self-serving do-nothing response of Trump who is obsessively focused on overturning the free-and-fair election that deposed  him (and pardoning criminal allies and family members), and the thoughtful, insightful, methodical focus of President-Elect Joe Biden on how to combat both the coronavirus crisis and the related jobs crisis. Biden’s remarks come in response to November’s jobs report that, even before the massive skyrocketing in COVID-19 cases, hospitalizations and deaths across the nation, showed a disturbing slowdown in economic recovery, with only 245,000 jobs added when well over 400,000 were expected, and an unemployment rate, which while dipping to 6.7%, does not reflect the 4 million people who have dropped out of the workforce and aren’t looking for jobs. The truer unemployment rate would be over 8%. Biden, in his remarks, was optimistic about a spurt of bi-partisanship that may produce a $900 billion COVID relief package, but says that is only a “downpayment” – an emergency relief to keep people from losing their homes and the ability to feed their family – on what will be necessary.

Already, the failure of Republicans to allocate aid to states and localities has resulted in 1 million layoffs of critical workers, with many more teachers, firefighters and hospital workers who will lose their jobs when they are most needed. Moreover, though the administration is touting the near availability of a COVID-19 vaccine, it has failed to actually contemplate how to distribute it, administer shots, or who will pay for the health workers to administer the vaccinations to the general public. (Reminder, you need 70 percent of the population to get the vaccinations in order to even begin to have “herd immunity” to end the pandemic.) But actually sparking the economy again will require real stimulus spending, for much needed and neglected infrastructure. Here are President-Elect Biden’s remarks, as prepared for delivery in Wilmington, Delaware: –Karen Rubin/news-photos-features.com

It’s a grim report. It shows an economy that is stalling.

We remain in the midst of one of the worst economic and jobs crises in modern history.

But it doesn’t have to stay that way.

If we act now, we can regain momentum and start to build for the future. There is no time to lose.

Millions of people have lost their jobs or had their hours slashed. They’ve lost their health insurance or are in danger of losing it. One in every six renters was behind on rent. One in four small businesses can’t keep their doors open. An ongoing gap in Black and Latino unemployment remains too large.

And it’s deeply troubling that last month’s drop in overall unemployment was driven by people dropping out of the labor market altogether. They’ve lost hope for finding a job, or they’ve taken on full-time caregiving responsibilities as child care centers remain closed and their children learn remotely.

Over the last three months, 2.3 million more people are in long-term unemployment — by far the largest increase on record.

And this dire jobs report is a snapshot from mid-November before the surge in COVID cases and deaths in December as we head into a dark winter.

For example, since October, cities are down 21,000 educators — just as schools need more help in the fight against the pandemic.

A couple of days ago I spoke with a school crossing guard, a server, a restaurant owner, and a stagehand. Good people, honorable people — decent Americans from across the country.

They remind me of my Dad who lost his job in Scranton and eventually moved our family to Claymont, Delaware, just outside of Wilmington.

He used to say, “Joey, I don’t expect the government to solve my problems. But I expect it to understand my problems.”

The folks out there aren’t looking for a handout. They just need help. They’re in trouble through no fault of their own. They need us to understand.

We are in crisis.  We need to come together as a nation.

And we need Congress to act — and act now.

If Congress and President Trump fail to act by the end of December, 12 million Americans will lose the unemployment benefits they rely on to keep food on the table and pay their bills.

Emergency paid leave will end.  The moratorium on evictions will expire. States will lose the vital tools they need to pay for COVID testing and public health workers.

It will be harder for states to keep children and educators safe in schools and to provide assistance to keep small businesses alive.

They have already laid off more than a million workers — and even more teachers. Firefighters and cops will lose their jobs unless the federal government steps up now.  And all of this weakens our ability to control the virus.

Emergency paid leave reduces the spread of COVID, because it allows people to stay home when they are sick.

States and cities need funding to direct COVID response — which is the only way we can end this crisis and get people back to work.

The situation is urgent. If we don’t act now, the future will be bleak.

Americans need help and they need it now, and they’ll need more come early next year.

I am encouraged by the bipartisan efforts in the Senate around a $900 billion package of relief.

And as Congress works out the details of the relief package, we must focus on resources for the direct public health response to COVID-19.

We need meaningful funding for vaccines now so that we don’t lose time and leave people waiting for additional months.

We need serious funding for testing now so we can ramp up testing and allow our schools and businesses to operate safely.

In the weeks since the election ended, there were questions about whether Democrats and Republicans could work together.

Right now, they are showing they can. Congress and President Trump must get a deal done for the American people.

But any package passed in the lame duck session is not enough. It’s just the start.

Congress will need to act again in January.

Earlier today, I consulted with members of the economic team Vice President-elect Harris and I announced this week.

As we inherit the public health and economic crises, we are working on the plan that we will put forward for the next Congress — to move fast, to control the pandemic, to revive the economy, and to build back better than before.

We hope to see the same kind of spirit — of bipartisan cooperation —as we are seeing today.

And our plan is based on input from a broad range of people who Vice President-elect Harris and I have been meeting with since winning the election last month.

There is consensus that, as we battle COVID-19, we have to make sure that businesses and workers have the tools, resources, guidance, and health and safety standards to keep businesses and schools open safely.

Because here’s the deal:

The fight against COVID won’t be won in January alone.

To truly end this crisis, Congress will need to fund more testing as well as the equitable and free distribution of the vaccine.

We’ll need more economic relief as a bridge through 2021 until both the pandemic and economic crises are over.

And, then we’ll need to build back better. An independent analysis by Moody’s — a well-respected Wall Street firm — projects my Build Back Better plan will create 18.6 million jobs.

It’s based on a simple premise: reward work in America — not wealth.

We will invest in infrastructure, clean energy, manufacturing,  and so much more.

This will create millions of good-paying American jobs and get the job market back on the path toward full employment. This will raise incomes, reduce drug prices, advance racial equity across the economy, and restore the backbone of this country, the middle class.

Not just to help them get to the other side of this painful crisis, but to avoid the broader economic costs due to long-term unemployment and businesses failing.

And by acting now, even with deficit financing, we can add to growth in the near future.

In fact, economic research shows that with conditions like today’s crisis — especially with such low interest rates — not taking the actions I’m proposing, will hurt the economy, scar the workforce, reduce growth, and add to the national debt.

I know times are tough, the challenges are daunting, but I know we can do this.

We can create an economic recovery for all. We can move from crisis to recovery to resurgence.

This is the United States of America. We’ve done it before. We will do it again.

May God bless America.
May God protect our troops.

I’ll stop there and take your questions.