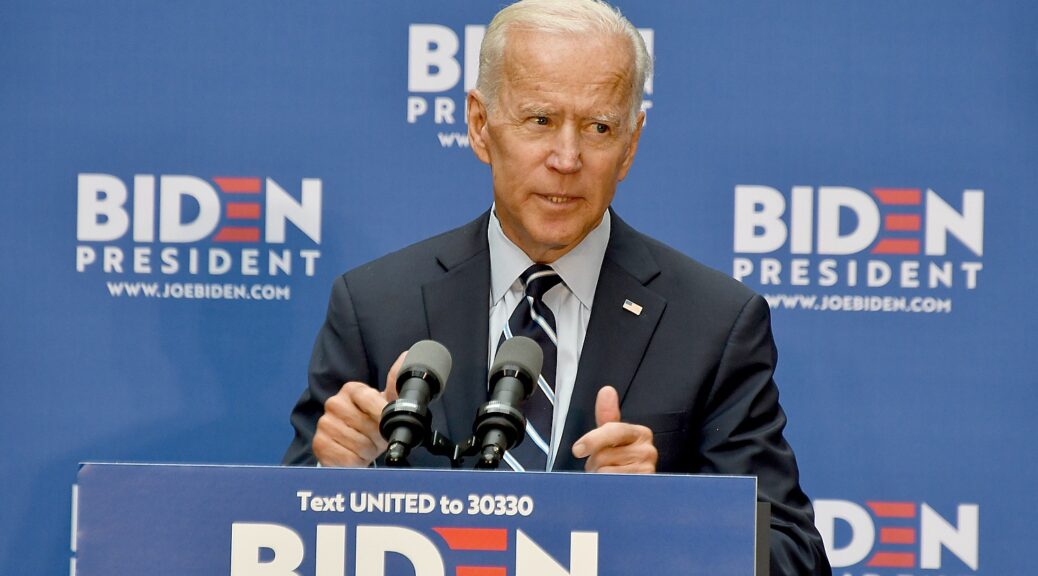 After the April jobs report showed a loss of 20.5 million jobs and an unemployment rate of 14.7% – the worst since the Great Depression –former Vice President Joe Biden, the presumptive Democratic nominee for President, offered these remarks on “Trump’s Disastrous Economy,” saying “it didn’t have to be this way.” Here are the remarks, as prepared for delivery, which provide an alternate to how things could have, should have been handled:

This morning, we received the worst jobs report in history. 20.5 million jobs lost last month, and an unemployment rate now 14.7 percent — the highest it’s been since the Great Depression.

It’s an economic disaster worse than any we have seen in decades — and it’s made all the worse, because it didn’t have to be this way.

Donald Trump utterly failed to prepare for this pandemic and delayed in taking the necessary steps to safeguard our nation against the near-worst-case-economic scenario we are now living.

COVID-19 caused a massive economic challenge. But this crisis hit us harder, and will last longer, because Donald Trump spent the last three years undermining the core pillars of our economic strength.

Many small businesses have closed because of stay-at-home orders. But a lot of them won’t open again because they do not have a cushion due to three years of Trump’s policies that reward the biggest companies.

Yes, many have lost their jobs because of this crisis — but we are seeing so many proud families forced to endure epic lines for food boxes in football stadium parking lots because Donald Trump has spent three years tilting the playing field to the wealthy, and not the middle class.

Trump has loved to crow about the great economy he built. But when the crisis hit, it became clear who that economy has been built to serve. Not workers. Not the middle class. Not families.

Trump’s economic agenda has three unmistakable failings; failings that have been present since day one, but are coming into sharp relief in the current crisis:

First, Donald Trump’s main measure of economic progress is the state of the stock market.

For the past three years, even as Americans have had to work harder than ever to pay their bills, he’s said the economy was “great” because the stock market was up.

He irresponsibly downplayed and delayed action on the virus to protect the Dow Jones Average, a choice that has so far cost tens of thousands of American lives and millions of American jobs.

Make no mistake: it doesn’t matter how much the market rebounds. As long as there are millions of unemployed people struggling to get by — we won’t be anywhere near bouncing back.

Second, his entire economic strategy is focused on helping the wealthy and big corporations.

Just imagine what we could be doing now with the $2 trillion in tax cuts that Trump delivered for his rich friends as his first priority.

Imagine how much better a position we’d be in right now if — instead of Donald Trump cheering on corporations that spent hundreds of billions buying back their stock — those corporations were using that money to keep workers on their payrolls.

Imagine if, instead of providing incentives to shift jobs overseas – he had ensured we were investing in manufacturing at home.

Imagine how much more resilient our small businesses might be right now if – rather than repeatedly trying to slash the Small Business Administration’s budget – Trump had invested in making them stronger.

Imagine if instead of fighting tooth and nail to take away people’s health insurance, he’d invested in expanding access, so that families didn’t worry that a visit to the hospital would put their finances at risk.

Third, Donald Trump claimed he would fight for the forgotten middle class – and as soon as he got into office, he forgot them.

He’s been President for more than three years, but hasn’t yet followed through on his core economic campaign promises to middle class voters.

He said it would all happen before May 2017. It’s now May 2020 and not one of these promises has materialized.

Instead, he’s run the same playbook that has hollowed out our economy time and again over the past four decades.

It always ends up the same way. The rich get richer, the powerful get more power, and everyone else gets told they just need to work harder.

We’ve heard it before — and we’re not buying it.

And if you need proof that Trump’s policies were a failure even before this virus hit, just compare the first 35 months of Trump’s presidency to the last 35 months of the Obama-Biden Administration, hiring was slower and real wages grew more slowly too.

Trump was already well into the process of hollowing out the good economy we left him long before the first case of coronavirus.

The numbers looked good, but underneath the numbers, things were eroding.

But this pandemic has laid bare exactly how much damage Trump has done in just over three years.

Because Donald Trump has gotten the virus response wrong, the jobs and unemployment numbers are just the beginning. His mistakes will also mean it takes more time to recover from this.

We’re already seeing the tell-tale hallmarks of Trump-o-nomics in the way he is implementing the crisis response efforts: no strings, no oversight, no accountability.

I’ve started to think of it as the Corrupt Recovery.

First, Trump made sure we didn’t have an empowered Inspector General to oversee all of this.

And now, we seeing reports that loan money went to Trump’s donors, political allies, and companies with Trump-connected lobbyists.

Here’s how it worked: Trump’s Treasury Department allowed corporations with connections to go right to the front of the line — they got concierge service.

Meanwhile the mom and pop shops that needed help most got shut out.

The single largest recipient of small-business money was a hotel executive and a major Trump donor.

The Trump Administration let him exploit the loophole to get $59 million in help, and he’s only giving it back now because the press found out.

And, who knows what else we’d find if the Trump Administration would stop hiding the full list of businesses who received help.

This is your money they’re getting.

We’re reading press stories that the Trump Administration is allowing big corporations that take money to lay off their workers, while other big companies are laying off workers then pay-out millions to shareholders.

How hard is it for Trump to say that if you are a major corporation and you are going to receive taxpayer money, you must first use it to take care of your workers?

But it turns out corruption is a feature of the Trump economic agenda, not a bug.

He will pick his wealthy friends, his corporate cronies, over working families every time.

I say it’s time we pick a different way.

In the coming weeks, I’ll be laying out a detailed plan for the right kind of economic recovery. Today, let me outline just a few key principles.

It starts with rebuilding the backbone of this country: a stronger, more inclusive, more resilient middle class – a middle class that can withstand the next public health crisis or whatever else comes our way.

It’s time we make sure everyone gets a fair shot at success, not just the Mar-a-Lago crowd.

Since the very first days of my campaign, I’ve had a simple message:

Wall Street and CEOs didn’t build this country. The middle class built this country. Ordinary women and men who are capable of doing extraordinary things when given half a chance. They built the country.

Who is out there on the front lines of this crisis? Who are the workers that are literally carrying this nation on their backs?

The doctors and nurses and other health care workers. The EMTs and firefighters and police. The grocery store clerks and the meat packers and the farmers. The delivery drivers and the mass transit workers.

And these heroes are all too often the lowest-paid and the least appreciated members of our society.

But this crisis is showing us what is essential. And, I think it’s time we reward the people who actually make this country work.

I do believe that from this moment, from this crisis, we have the opportunity to not just rebuild our economy—but transform it.

To make our economy more resilient for whatever comes our way in the future.

Making sure everyone has paid sick leave and child care support.

Putting millions and millions of people to work building the new, green economy that will position us to own the 21st century.

Making sure we’re producing here at home the machines and equipment we need to fight the pandemic and ensure public health.

Guaranteeing an education that equips you to succeed,and access to high-quality, affordable health care.

We can restore the basic bargain that used to exist in this country. The bargain was that if you contributed to the success of an enterprise, you shared in the rewards.

And the way we will do that is by empowering our workers. It means encouraging unionization and collective bargaining. It means more protections to ensure fair pay, over-time compensation, worker-safety, and a secure retirement.

We can insist that big corporations – which we’ve bailed out twice in 12 years – set up and take responsibility for their workers and communities. They have to step up to do that.

We can rip out the race-based inequities that infect every part of our society— from the pollution being pumped into the air and water in communities of color to the health care treatment they receive.

I’ll have more to say on all this in the weeks ahead, but here’s what it comes down to: we can choose who our economy, our government,
and our country works for.

That’s the choice we must make – all of us together – this November. It could not be more stark what the choice is.

I’d like to end today by saying thank you to all of our front line workers who are working day in and day out to keep our nation afloat during this crisis. And who are risking their personal health and safety in the process.

And to everyone, to everyone who is struggling with this virus who I talk to or grieving a lost loved one or losing sleep worrying about how you are going to make ends meet for another week — I want to offer my heartfelt condolences.

The proof that there’s nothing, nothing we cannot accomplish when we stand together—one nation, united in purpose, taking care of our neighbors, committing to get the job done.

That’s what has seen us through every moment of crisis in our past — it will see us through again today. It will empower us to write the future we want for our country and our children.

There’s no quit in America. None at all. We’re going to get through this.

Thank you, and God bless you.