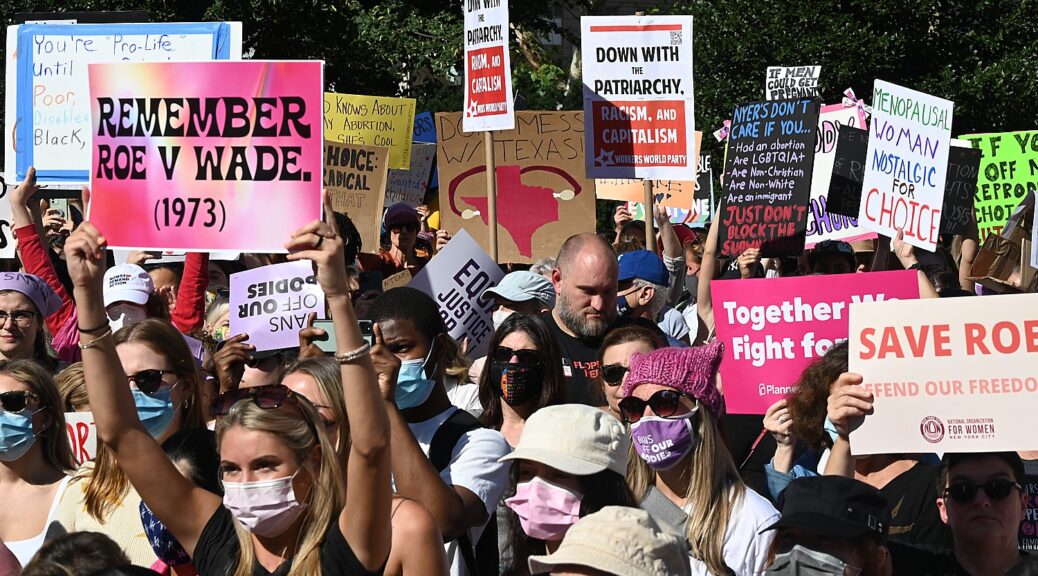 Thousands gathered in Foley Square, in front of the federal court house, to protest for justice, equal rights and full personhood for women in face of the assault on abortion rights from Texas and dozens of states and the right wing majority Supreme Court’s deference. The timing was key, just days before the Supreme Court begins its session in which it will hear a Mississippi case banning abortions after 15 weeks. Texas SB8 bans abortions after six-weeks, the theoretical point when a fetus has a heartbeat, and deputizes vigilantes and bounty hunters to enforce it against anyone even suspected of aiding a woman who gets an abortion and collect $10,000.

Rana Abdelhamid: “This is not about religion, not about life. They called us ‘hysterical’ for warning about the effort to overturn Roe v. Wade. It’s time for congress to do what’s right and protect our constitutional right to abortion. End the filibuster. We know what it is to have our bodies policed. Abolition Justice!

Donna Lieberman, executive director of the NYCLU: We stand with women in Texas, Mississippi and all over the country. Abortion Justice. Reproductive Justice. Make New York a safe haven, close every loophole in state law, so anyone can come for reproductive health. We won’t turn back. We will be at every polling place in every election. Hold elected leaders accountable.

Heidi Sieck, Vote Pro Choice: Reproductive freedom and abortion justice are at stake. Small, massively overfunded group of white supremacist, Christian conservatives have invested in state legislatures, built an anti-choice infrastructure. They stole two Supreme Court seats. That changes now. Over 80 percent support reproductive freedom. Pass the Women’s Health Protection Act (that passed the House, but not the senate), end the filibuster, rebalance Supreme Court. In November, 2021, 40,000 seats are up for election. Every ingle elected has a role to protect reproductive rights. Not just congress but state and local. Run for office, donate to VoteProChoice.us.

Congresswoman Carolyn Maloney: They have been chipping away at abortion rights for years, but now they are bulldozing our rights into the ground.Last week, chaired House Oversight Committee on Texas SB8, when three Congresswomen told their abortion stories. Women are speaking out. In December, Mississippi comes before the Supreme Court. For my entire time in Congress we hadn’t had a pro-choice majority, until this year. We passed the Women’s Health Protection Act, codifying Roe. It has to pass in the Senate. We could pass it except for the filibuster. We have to carve out an exception. There is no democracy if women cannot control their own bodies, make their own reproduction choices. It is so outrageous, I can’t believe we are still fighting for this.

Congressman Jerry Nadler, who, over 50 years ago, lobbied the New York State Assembly to legalize abortion: It’s been 30 days since women were stripped of their constitutional rights, their freedom to make their own decisions of their lives, their bodies. That’s 30 days too many.

Amsi: The battle for reproductive rights is not new. It’s been long, hard, frustrating.

Pascale Bernard, Planned Parenthood of New York City: History is repeating. We have been here before. Enough is enough. Women in Texas are having to drive to Oklahoma, having to choose between paying for an abortion or feeding their children. People are scared. Justice Ginsburg told us to dissent, she left a roadmap to protect reproductive rights. We are lucky in New York, but we nee dto close loopholes, we need an abortion fund so women can come to New York for care, for safety.

Cathy Rojas, a teacher and candidate for NYC mayor running as a Socialist: We need to build a sustainable people-powered movement ion New York City, In Texas, where people were freezing and is one of worst states to live – hunger, poverty of children, maternal mortality – they are leading the attack on abortion rights. So when claim is about protecting life, is really about protecting profit over lives.The right wing don’t give a damn about lives. Instead of dealing with the real crises are attacking abortion rights. Congress is ineffective at passing laws for basic necessities, but quick to bail out banks and the ultra rich. They always find time to attack women, LGBTQ and the vulnerable. This is not just about a bad law, but the whole damn system – the bigots, the politicians for hire, the courts up to the Supreme Court, the corporate control of the media, the police and ICE. I am fed up with capitalism. We need systemic change.

The Band Betty: We are one-fourth through the 21st century. I don’t see flying cars or universal health care. I see women being told to be ashamed. Until women have equal rights in the Constitution, we will continue to see how the state commands our fate.

Rev. Nori Rost, New York Society of Ethical Culture: They are “protecting” a fetus with a heartbeat? How about fighting for people who already have a heart beat. Anti-choice, anti-woman is nothing new – it is about subjugation, oppression. We will not give up, shut up, slow down, sit down until all people have agency over their own body. We are among millions marching as one, we will not be stopped.

Jeannie Park (Warriors in the Garden): Abortion bans have no humanity, no exception for rape, incenst. 3 million have experienced rape, the next 3 million will be forced to carry to term. The penalty to abort is more severe than to rape. Women’s bodies are more regulated than guns. What does it mean to be pro life if you only value certain lives. Encouraging vigilantes, bounty hunters is too lcose to the Fugitive Slave Act of 1850. I will not go back.

Miriam Elhajli sings a song 100 years old, “Wagoner’s Lad,” and sounding so much like Joan Baez who sang it:  “Oh, hard is the fortune of all woman kind/She’s always controlled, she’s always confined/Controlled by her parents until she’s a wife/A slave to her husband the rest of her life”

Carol Jenkins, Co-President and CEO of The ERA Coalition and the Fund for Women’s Equality: The Equal Rights Amendment has been around for 100 years; it has been 50 years since passed in Congress, now 38 states have ratified it, so could be published in the Constitution. The only hold up is a time limit, put into the introduction, not the amendment. The root of sexism, misogyny, and racism is in the Constitution, written by slaveholding white males. Everything we’ve been doing since has been to repair what was left out of the Constitution. We have to put the ERA on list of things, so we don’t have to keep repairing the Constitution. Congress has removed the timeline twice, it is now in the Senate. We are done having to beg for rights, gather in the streets and ask “please”. Go to ERACoalition.org.