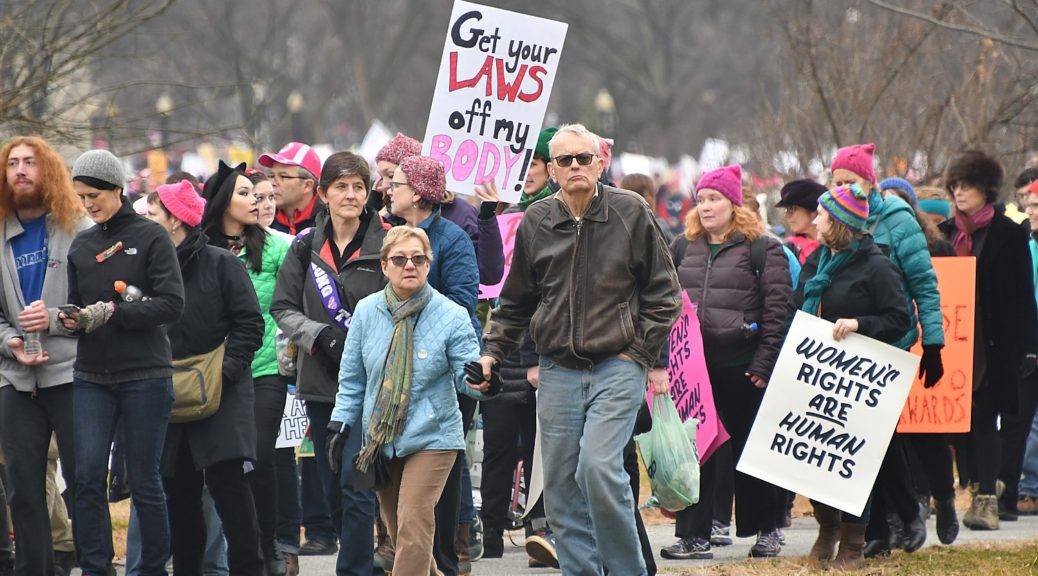 Abigail Adams, writing to her husband, John Adams, a Congressman at the time, in March 1776, warned, “Remember, all men would be tyrants if they could. If particular care and attention is not paid to the ladies, we are determined to foment a rebellion, and will not hold ourselves bound by any laws in which we have no voice or representation.” That revolution clearly is still going on, despite finally getting the right to vote 144 years later and nearly a century ago.

Even after women staged the biggest protest in history exactly a year ago, swamping Washington DC and coming out by the hundreds of thousands in cities and hamlets across the country, Republicans did not get the message, but spent their first year in total control of all the levers of government systematically dismantling all the elements of a free and equal society, and specifically, waging a war on women’s rights, health and security.

Republicans went full throttle to attack women’s reproductive rights – the House has already passed a 20-week ban on abortion which is set to go to the Senate and is guaranteed of Trump’s signature, while dismantling health clinics.

“The threat for women—and reproductive freedom—is greater than ever,” writes Ilyse Hogue, President, NARAL Pro-Choice America. “The consequences of this bill becoming law would be gut-wrenching. Women seek abortion care after 20 weeks for a variety of reasons, including medical problems, difficulty accessing care, and the fear that comes with rape, incest, and abuse.” The bill makes it a crime for a doctor to perform or attempt an abortion after 20 weeks of pregnancy with no exceptions for a woman’s health. The bill would leave a woman—and her healthcare provider—with no safe and legal option.

And hidden in the 429-page Republican Tax Law is a provision that establishes “personhood” by giving legal rights to a fetus for the purposes of college savings accounts. “That might seem innocuous, but once that legal precedent is established, it’s a short step to banning abortion outright.”

Let’s be clear: women’s reproductive rights are not just about the freedom to make choices about one’s body, but one’s future. It is nothing less than the right to self-determination which men claim. It is about Equal Protection under the Constitution. If men have a right to life and liberty, so do women and nothing less. Men don’t require government authorization to get a vasectomy or take Viagra (covered under health insurance). And women should not be made less of a person, less of a citizen than a zygote, with government as its unappointed “Regent”.

“It took us a while to figure out,” Gloria Steinem said in an interview with The Guardian, “but patriarchy – or whatever you want to call it, the systems that say there’s masculine and feminine and other bullshit – is about controlling reproduction. Every economics course ought to start not with production but with reproduction. It is way more important.”

The tax code Trump and the Republicans are so proud of attacks everything that makes the American Dream possible, and everything that women count on for their families. Republicans have yet to reauthorize CHIP, leaving 9 million children and pregnant women without access to health care. And what of that child after the Republicans compel its birth? They are stripping away access to child care, pre-K, health care, special education. Now Republicans will go use the mounting budget deficit – $1 trillion – because of their tax plan, to go after Medicare, Social Security and Medicaid, food stamps and welfare – things that women, who live longer but have lower earnings throughout their working lives, or who are more apt to be single parents – depend on to a greater degree than men. (To see what a pro-Woman agenda would look like, read what Governor Cuomo is proposing.)

Not to mention Trump’s executive actions and his appointments to EPA, Interior, Education, Health & Human Services, Energy and the judiciary who are enacted policies that harm women and families, climate and public health.

In each and every category of concern to women:  health care, immigration, climate change and environmental justice, domestic violence and gun violence prevention, criminal justice. Trump, who through words and actions has shown nothing but contempt for women, and the Republicans have sent a big F-U to women.

Republicans after the 2017 women’s marches, felt they were safe, that women would just forgive and forget, go away, be too consumed with the pressures of earning a living wage to keep their family with food and shelter, than to be politically active.

Indeed, the furor of last year’s Women’s March was quickly dissipated over addressing the Outrage Du Jour: Travel Ban, withdrawing from the Paris Climate Accord, unleashing ICE to round up undocumented immigrants, gun massacres of historic scale, horror over the government’s failure to address the climate catastrophe Puerto Rico, efforts to repeal Obamacare, then the tax code.

But then there was the #MeToo movement. I can only imagine that the furor has some quaking at the new-found power of Womanhood (but also fear that overuse, amounting to a Salem Witchhunt, will result in a backlash).

This year’s protests are different because 2018 will be the first significant opportunity for voters to take consequential action at the polls. That’s why these protests are so much more important than a year ago.

“[Last year] we marched for even bigger, more systemic issues. We marched because 1 in 4 women is sexually assaulted in her lifetime (as well as 1 in 6 men). Women make up half of the country but only 19% of Congress. Women earn 79 cents to a man’s dollar, and that percentage drops to 63 cents for Black women and 54 cents for Latina women. And there are more anti-abortion laws on the books now than at any time since Roe v. Wade,” writes Caitlin Alesio Maloney, Director of Campaign Operations & Technology.

“None of the issues went away in 2017, but we are seeing progress. #MeToo was a breakout movement that is bringing about real change. Emily’s List had 920 women interested in running for office in 2016, but 16,000 women reached out to them to run in 2017. And with the Women’s March Power to the Polls project launching the day after the anniversary marches, we know this movement can make the difference and get them elected in 2018,” she stated.

“We need to show up for #MeToo. For Time’s Up. For women’s reproductive rights. For equal pay. And we need to show up to remind Donald Trump, on the anniversary of his inauguration, that We. Will. Always. Resist.”

These are the issues but here is the action: March Into Action will be registering voters at the march to support a national effort to register 1 million women to vote by the 2018 elections.

There are some 280 women’s marches taking place across the country on Saturday, January 20, with the largest in New York City, organized by Women’s March Alliance, Corp., 11:00 AM – 3:00 PM, Columbus Circle  with a rally at about 11:30 (line up up Central Park West), followed by a march down to Sixth Avenue & 45th Street. (https://womensmarchalliance.org/2018-womens-march-on-nyc/2018wm-faq/

This time, instead of cutesy pink pussyhats, we should wear black and come with pitchforks (or broomsticks).